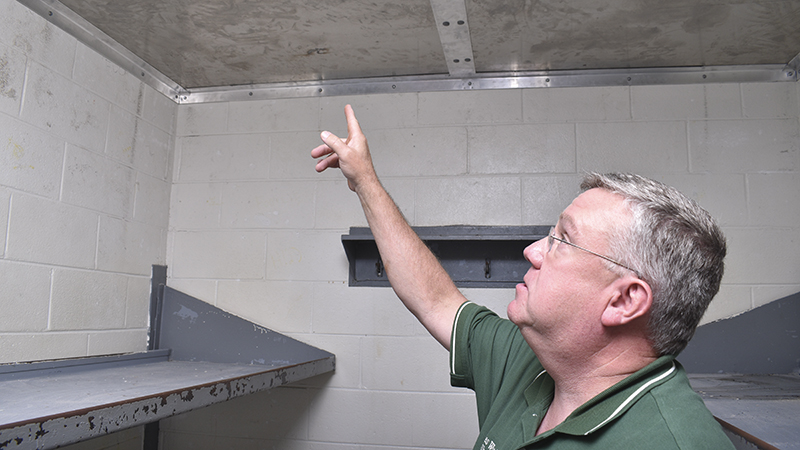 After two inmates escaped Troup County Jail earlier this month by creating a hole in the ceiling an taking to the roof, Sheriff James Woodruff said new reinforcements were added to the jail. Woodruff points out the new ceilings in the dorms where the inmates broke out. (Gabrielle Jansen | Daily News)

Sheriff James Woodruff said the jail is adding steel ceilings with reinforced poles and installing razor wire to its roof. There will also be changes in how inmates are accounted for.

Inmates Eric Bell and Thomas Cuddington escaped Troup County Jail on Aug. 15 after cutting a hole through a ceiling, allowing them to make it to the roof. The inmates then walked to one end of the sheriff’s office roof and slid down a pipe outside the administration office. Bell was caught on Hamilton Road on Aug. 17. Cuddington was caught on Wallace Street on Aug. 20.

“[In one of the dorms,] they were laying on the top bunk, and they constantly worked on a hole,” Woodruff said. “It’s ironic, but it’s kind of like ‘Shawshank Redemption’ where they would cover it up, and they kept working on it until they got it about [1 foot long].”

Woodruff said that visitors can even see shoe scuff marks on the building from where Bell and Cuddington slid down the poll.

“Since [the escape] we’ve had several meetings with supervisors and with jailers about the new way we’re going to start doing things and the changes we’re going to make,” Woodruff said. “There’s a lot of changes you see and a lot you don’t, and we have to keep it that way.”

Woodruff said Bell and Cuddington’s escape was the second time in history that inmates have escaped Troup County Jail. In the 1990s, three inmates escaped from the medical segregation unit where they worked on a wall near the sheriff’s office entrance, dug out the concrete and climbed over a fence.

“There’s no way you can climb four feet of razor wire, and if you did, you have to jump, and it’s probably 30 feet to the ground,” Woodruff said.

Bell and Cuddington have additional charges of escape and are on lockdown, where they are let out of their cells for one hour a day, according to Woodruff.

“What I was forced to do when we got them back was to put them in segregation, where they’re locked down 23 hours a day because they are security risks now,” Woodruff said.

An employee at the sheriff’s office has also been officially reprimanded, according to Woodruff.

As of Tuesday afternoon, there are 523 inmates at Troup County Jail.

Woodruff said jails and prisons have tight security, but there is always a weak spot in them.