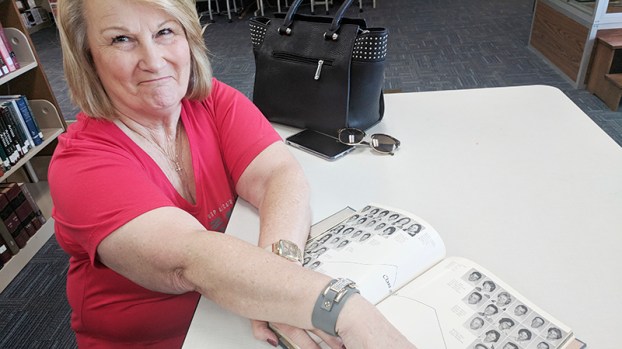 Linda Henry Coffield points out a photo of herself in the yearbook. (Contributed)

When Linda Henry Coffield opened her high school yearbook, The Trouper, she began reminiscing about her time as a Troup tiger. Even though her classes took place more than 50 years before in the old Whitesville Road Elementary building, she remembers it like it was yesterday.

“Troup High was a place of solace for me,” Coffield said. “I enjoyed coming to school, seeing my friends, and spending time away from home. For me, Troup High was like a family atmosphere, so it was my family.”

Coffield moved to North Carolina before she could graduate from Troup High School due to family reasons. Even after five decades, she still has a heart for THS. About two weeks ago, she called the school to ask if she could purchase a yearbook from 1964.

While she was a little disappointed to find out administrators could not order her one, she was surprised when they invited her to walk the halls and meet current administrators.

THS Principal Niki Watts and Media Assistant Christine Lightholder arranged for Coffield to take a tour of the building. Little did Coffield know, a copy of the requested yearbook was awaiting her in the media center. As the group made their way to the table and Coffield saw The Trouper, tears began to form in her eyes.

“I just have so many wonderful memories here,” Coffield said. “My older brother was on the football team and my younger sister was in the 8th grade. At that time, the school housed eight graders through twelfth graders. Troup was like home to me so this means so much.”

“It is a miracle we were able to find this yearbook. A number of years back, we had an area of the school that flooded,” Watts said. “That was where all of our yearbooks were housed. Many of them were destroyed due to water damage. When I reached out to the media center, Ms. Lightholder said they also keep yearbook copies in the media center. We are glad we can provide a piece of history for Mrs. Coffield.”

While Coffield flipped through the book, she said her husband of 43 years was excited she was able to make the trip to see the school, find old friends and connect with her high school sweetheart.

“I remember he played the guitar and had a ‘57 Chevy. That was the car to have back then,” Coffield said. “We met when I visited my grandmother’s house in West Point. He lived on the same street as she did, so I would always see him when visiting.”

She shared impressionable memories of her late brother playing football, her younger sister being a sweet young lady and friends that helped make her high school years unforgettable.

Watts joined in stating that she understands the Tiger Pride that seeps through Coffield.

“I graduated from Troup, worked here as a teacher, and now I’m the principal, so I understand that sense of belonging and feeling of pride that Troup High can give,” Watts said.