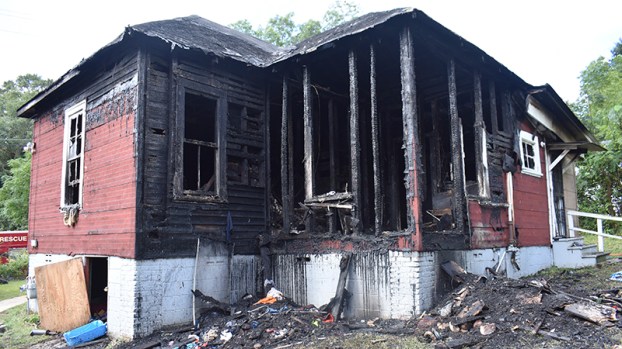 A house on Revis Street is pictured following a fire on Monday morning. Six LaGrange firefighters were hurt in the fire and four remain hospitalized. --Contributed

Four of six LaGrange firefighters hurt in a fire on Revis Street Monday are still recovering from their injuries at Grady Hospital in Atlanta.

LFD Deputy Chief John Brant said on Tuesday one of the firefighters had skin grafts and was recovering, two are scheduled for surgery Thursday, and the other was under evaluation to see if he needs surgery. Brant did not specify which of the firefighters were receiving which treatments.

Brant said he is not sure about long-term recovery, but said one of the firefighters may need two weeks in the hospital and the others are staying at least four weeks. One of the men has second degree burns and the others have second and third-degree burns.

LaGrange Public Safety Chief Lou Dekmar said morale was high when he visited the firemen, even though they are in a lot of pain. Dekmar said two of them may be transported to a hospital in Augusta. Dekmar said the firefighters told him they were ready to go back to work and described them as good natured and good humored.

“They have one thing in common, and that is an enthusiasm for service and for firefighting,” Dekmar said.

Brant said they are all outstanding people in the community.

“At the firehouse, they all believe in training, and that was evident in them being able to get out of the structure alive,” Brant said. “They relied on their training to get out, and [they’re] some outstanding young men.”

Dekmar said in his 23 years in LaGrange, he has never seen firefighters injured like this.

“We’ve had firefighters injured in the past, but generally it was for acute and relatively minor burns, and, of course, for smoke inhalation and exhaustion,” Dekmar said. “But we’ve not had an occasion where firefighters have been caught in a flash like this, so as a result two crews were affected.”

“These are some fine men who are dealing with very difficult medical issues,” Thornton said. “They are receiving the best possible care, and the city is doing all we can to support them and their families. Prayers are still strongly encouraged because they have a lot of treatment and healing yet to come.”

About 60 people are employed at the LFD, according to Dekmar. He said other local fire departments have reached out to help with the LFD’s shifts.

“In addition, we’ll rearrange scheduling and reduce days off as needed,” Dekmar said. “Between the offer of assistance from area firefighters and our contingent of firefighters, we’ll be able to adequately staff the stations with no problem.”

Several local first responder agencies posted on Facebook, asking for everyone to keep the firefighters in their thoughts and prayers. The Troup County Board of Commissioners started its meeting with a prayer Tuesday for the men.

The LaGrange Fire Department responded to a fire on the 300 block of Revis Street Monday when they were injured. The firefighters were responding to the fire when it “flashed on them,” Brant said.

According to a City of LaGrange press release, the four firefighters jumped through windows to escape the flames.  No injuries were reported for any of the home’s residents.

“As evidenced by this event, there’s no amount of training and safety procedures that can eliminate the ever-present danger that’s confronted by firefighters and dictates a special breed of individuals who commit themselves to a profession where they’re prepared to sacrifice their safety for others,” Dekmar said. “And I think this is just an example of that.”

In addition to a GoFundMe campaign for the firefighters and their families, Brant said donations are also being accepted at LaGrange City Hall. To make a physical donation at city hall, ask for public services director Dion Senn. His office is on the third floor.  Get well cards can also be sent to the LFD’s headquarters at 115 Hill Street in LaGrange. For more information on the GoFundMe for the firefighters, visit GoFundMe.com/injured-lagrange-firefighters. As of Tuesday evening, $7,755 has been raised.