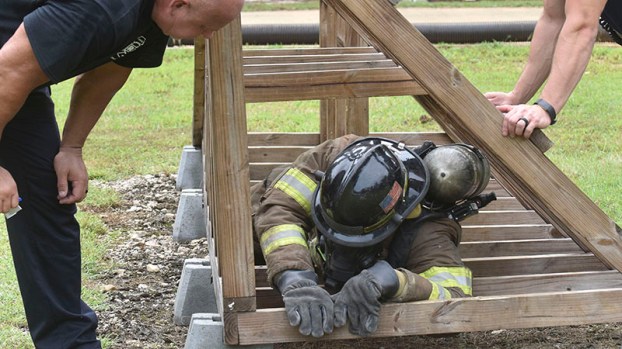 “We try to have at least one (rookie school) a year depending on people retiring and things like that. Sometimes we don’t really have the new hires to do it,” Brubaker said. “This is the first class in a while where we’ve had this (many) rookies.”

Brubaker said this was the second rookie school the LFD held in two years.

“This is the first day, so we’re just getting a baseline of where they’re at physically and mentally,” Brubaker said.

The rookies will also learn basic fire behavior, ventilation techniques, how to rescue their own, and bail out techniques if they end up in a bad situation, according to Brubaker.

In addition to LFD firefighters training the rookies, a few members of the TCFD were also watching Tuesday.

“It’s a very important course. It lays the foundation for them to build upon throughout their entire career,” TCFD Chief Dennis Knight said. “We wish them the best and encourage them.”

Brubaker said the training will get progressively harder as it goes on.

“Starting [Wednesday], we’ll start doing our runs and our actual physical training in the morning,” Brubaker said. “It will definitely challenge them physically.”

Brubaker said the rookies are a great group of guys.

“They seem like they’ve got good heads on their shoulders,” Brubaker said.

From Staff Reports The Valley Times-News WEST POINT — An estimated 500 people were in attendance for a Labor Day... read more