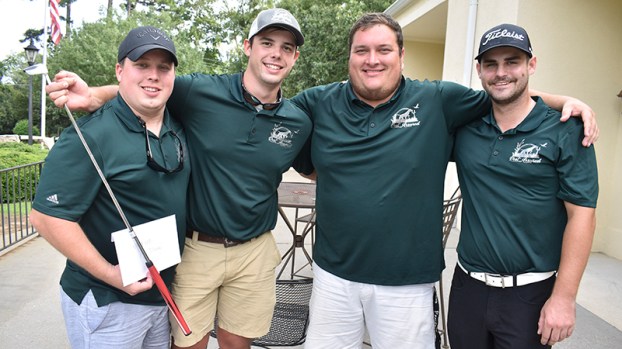 “We did something new this year in that we got a scholarship at [LaGrange College] in the name of Dr. William Fackler and his wife,” said current Lions Club president Barrett Orendorff. “In a couple of years, we’ll start giving scholarships, but we need to fund it first. We’re in the process of doing so. Dr. Fackler was a member here for over 60 years, and he was a very, very important part of the club throughout the years.”

Linda Mack, chair of the golf tournament, said the money raised from the tournament would go to the scholarship, which is for students intending to go into the medical field.

“We have partnered with LaGrange College and are going to be contributing $25,000 over a 5-year period to the William and Mardrie Fackler scholarship fund at LaGrange College,” Mack said.

Mack said 22 teams participated Thursday. The tournament has been held for more than 40 years.

“It’s one of our major money-making endeavors,” Mack said. “We have this and then we have the barbecue.”

“We have probably on average 12 people we’re providing screening, eye tests and glasses for if they need it,” Mack said.

In addition to giving prizes to the top six teams this year, the club also provided the team who finished last a two-hour golf lesson.

“It’s a little bit humid, but the weather has really been nice,” Mack said. “We seem to have a lot of happy campers so far. When we’ve gone to talk to them, they said they’re having a good time.”

HOGANSVILLE – The Hogansville City Council picked an engineering firm to work alongside the city for the 2019 Community Development... read more