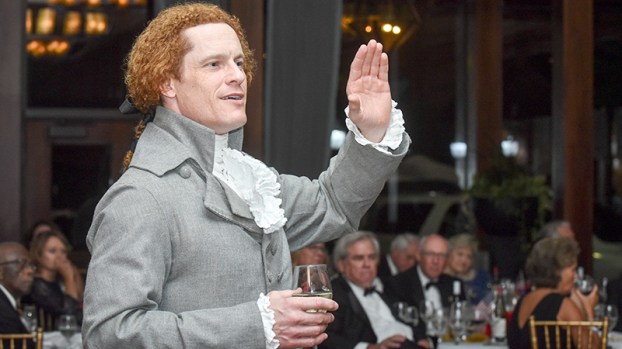 Wine glasses were clinked, French cuisine was served and a Thomas Jefferson impersonator spoke Thursday at Marquis de Lafayette’s birthday dinner at Del’avant Event Center. The Lafayette Alliance hosted the event to recognize Lafayette’s 261st birthday, which included an exhibition of paintings of Lafayette, a musket and a letter written by the historical figure.

“We are defined by the stories we tell. Let’s talk about an idea. It has to do with Lafayette’s story,” said Lafayette Alliance President Richard Ingram. “… On Tuesday, Aug. 8, 1775, Lafayette for the first time heard the tale of Lexington and Concord and about this rag tag army of merchants and farmers rising up to fight for their independence in America. Then and there, he discovered his place. He would fight in America with Americans for their independence.”

The evening included jazz music performed by Peachtree Jazz Edition. John Lawrence, director of the Lamar Dodd Art center, presented a slideshow on the history of the statue at Lafayette Square.

Ingram gave remarks of Lafayette’s story as a tale about purpose, hope, courage, character and resilience.

Thomas Jefferson impersonator, Steven Edenbo, said his friend and Lafayette impersonator, Benjamin Goldman, was originally contacted about the event, but he was already booked.

“I did (hours of) research to prepare for this on the French Revolution as well as in general, so beyond Lafayette’s involvement in it, but also in Lafayette’s life and from that, found anecdotes that might be illustrative and a perspective that I thought might not only be educational, but maybe even a little inspirational as well,” Edenbo said.

Edenbo started his Jefferson impersonation in 1999, and said he does his own writing and research to portray the character. As Jefferson, Edenbo spoke about his friendship with Lafayette.

Edenbo said his favorite story about the two was Lafayette saving Jefferson’s failing governorship of Virginia in 1781.

“He was a military leader at the time because Virginia was being invaded and Lafayette showed up and basically saved him,” Edenbo said.

Edenbo said his favorite Lafayette story was Lafayette hunting for a werewolf creature when he was 8-yers-old and would look out for it on his walks.

“There was a legend of a sort of a type of werewolf creature in the region of France where he grew up. The beast of the Gévaudan,” Edenbo said.

Troup County Historical Society president Joe Thompson said the dinner is going to get bigger and bigger every year.

“Lafayette’s story is for the young, the old and the in-between. It needs to be told in 1,000 different ways,” Ingram said. “This is a you and me project, which in time, could involve a Lafayette visitor center, holograms, virtual reality.”