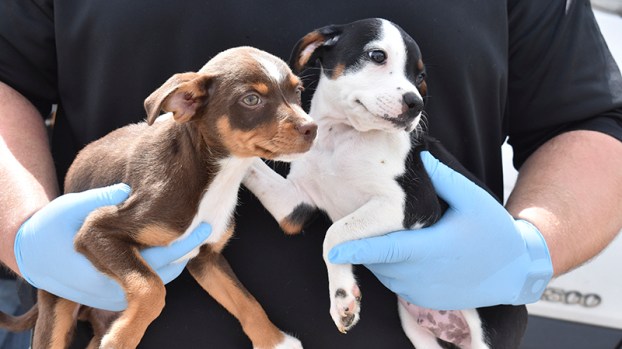 Around 70 Hilton Head Humane Society cats and dogs were evacuated to the LaGrange Animal Shelter Thursday due to the incoming hurricane. Puppies are carried from an animal transport to the shelter. (GABRIELLE JANSEN | Daily News)

Shelter from the storm: Animal shelter takes in animals in path of Hurricane Florence

“With Florence coming toward South Carolina and North Carolina, we’ve had a lot of partners reach out and say what can I do to help,” said Alison Hill, transport coordinator for the Atlanta Humane Society. “So, what we do is we clear the shelter ahead of the storm so that they can take in all of the displaced animals after the storm.”

Fifty cats and 16 dogs were taken to the local animal shelter. Some of the cats rescued were also taken on the Puppy Pipeline Thursday night as part of its scheduled transport. The Puppy Pipeline takes animals from southern shelters to northern non-kill shelters where there are strict spay and neuter laws, and there are fewer animals.

Bussey said they had already planned to transport cats and dogs on the Puppy Pipeline and had extra space for the Hilton Head cats.

“We’re able to do this because of Puppy Pipeline Rescue that we’ve partnered with,” Bussey said. “We send several animals to northern shelters due to us having several openings. I thought it would be nice for us to reach out and help somebody in need, especially since a hurricane is coming through and a disaster might happen.”

Bussey said they sent their 1,000th animal Thursday on the Puppy Pipeline for 2018.

Hill said all coastal shelters have an agreement with inland shelters to help out when storms move in certain areas to take in animals.

“(Last year), Hilton Head Humane took in a bunch of cats from Hurricane Harvey when it came through Texas,” Hill said.

“So then when Irma came through Georgia, Louisiana and Texas, they offered their services to take some animals from those. So, we all kind of work together just to get everybody safe and sound.”

All of the animals are adoptable and have been up to date on their shots and are fixed. When taking in animals, Bussey said they had to look at space in the shelter, but were doing OK.

“It’s nice to know that being an open admission shelter, we can extra provide help to another shelter and find the animals a home,” Bussey said.

“It was eye opening to see how much work was actually involved from taking in because we’re used to always sending animals out to other shelters.”

Because of the new animals, the shelter is asking for donations of blankets, cat litter, towels, dog bowls and paper towels, Bussey said.

The Visual Artists Alliance of LaGrange opened their annual show at the LaGrange Art Museum on Saturday. The show featured... read more