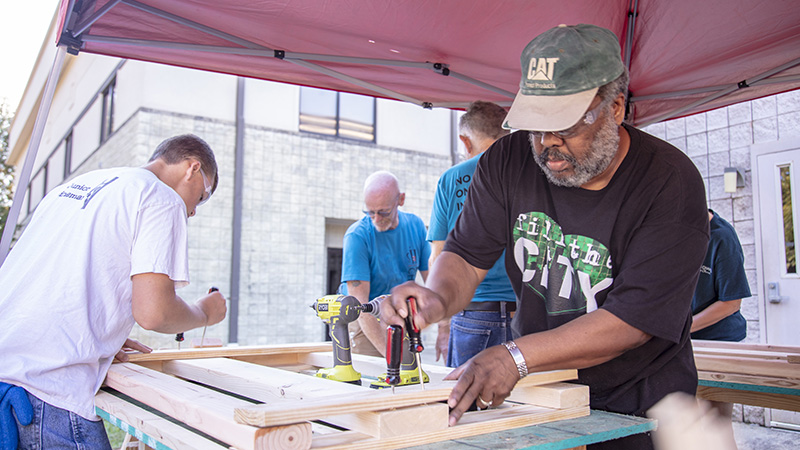 Watts said he first heard of the national Sleep in Heavenly Peace after it was highlighted on “Returning the Favor,” a Facebook web show where Mike Rowe travels around the United States and talks to people giving back to their communities. According to Sleep in Heavenly Peace’s website, there are 100 chapters of the nonprofit.

Watts said they started building beds in June and delivered their first one on July 4. The local chapter holds build days where volunteers create the beds, and they built 40 beds last Saturday.

“We provide everything, and set up an assembly line where we cut, sand, saw and assemble head boards and side rails, and then we dip them with a stain solution,” Watts said. “[We] store those until we have applicants, who are vetted. Then we do a delivery, which we include the bedframe, a mattress, sheets, pillows and comforters. When we leave, children are ready to go to bed.”

Watts said they have built 70 beds total since the end of June. The local chapter delivers about 15 beds a month and has seen the need pick up.

Watts said they’ve mainly been known through word of mouth.

“We’re really not a visible organization because we don’t have a location,” Watts said. “Everything that we have right now is mobile so we can take it to a business for a team building event or a church if a church wants to support us and build at their place. All of the things we do are pretty flexible and mobile.”

“This is a very giving community,” Watts said. “I’ve been here 35 years, and I’ve watched what happens around here. I had no doubt that the community would respond.”

“It’s been a lot of fun,” Watts said. “We get a lot of reward seeing kids get on their beds for the first time. (We see) a lot of happy faces.”

The nonprofit is accepting donations of wood, sheets, bedding and money. Donations can be sent to P.O. Box 800312, LaGrange GA 30240.

To request a bed, visit Shpbeds.org.