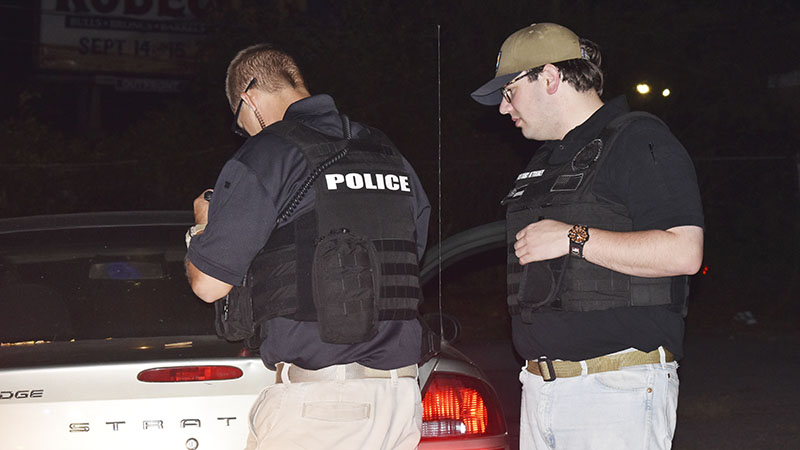 “[A gang investigator is] usually in here with me, so we have a drug guy and then we have a gang guy,” said LPD drug investigator Clint Stephens. “The other vehicle that everybody rides in, we try split that up too (with expertise).”

Stephens said they spent a lot of time doing paperwork and gathering intel at the police department during the week and go out in the communities on weekends.

“We typically try to put ourselves in high crime areas where violent crime is taking place or high drug activity areas,” Stephens said. “We do more of  proactive policing instead of being reactive to crimes.”

The special investigations unit, made up of drug investigator Stephens, gang investigator Jarrod Anderson, Det. Adam Blane drove around LaGrange on Friday. Troup County Assistant District Attorney Jack Winne was also riding along. Winne, who prosecutes gang cases, rides with the unit to serve as legal advice and to gain knowledge for when the cases go to superior court.

Winne said he doesn’t ride with the unit every Friday, and it’s not required for his job.

“I honestly don’t have to (go along on the investigation), but it’s been a couple weeks since I have,” Winne said. “I’d say at least half the Friday nights (they investigate), I’m with them.”

On Friday night, the unit had warrants signed for a suspect accused of influencing a witness. The suspect fled in a vehicle, but was later found and arrested on Monday, according to a police report.

Because Blane works in collaboration with the Georgia Bureau of Investigation’s West Metro Drug Task Force, he can get called out by other local agencies to investigate drug or narcotics cases.

On Friday, Blane was called out by Georgia State Patrol, who pulled over a man with drugs in his vehicle on Lafayette Parkway.

“I come out with [the unit] on the weekends when I can because it gets me back in the street level aspect of what’s going on around here,” Blane said. “I can’t make cases and do my job in an office. It’s just not the way that works. Plus, you get to know the community better, the people in it.”

The unit drives through gas station lots to help clear them late at night. The drive is also is a way to check on the stations and prevent robberies, according to Stephens.

The unit arrested several people who had warrants Friday.

One individual was arrested for marijuana possession after officers noticed his vehicle smelled strongly of marijuana.

The special investigations unit responded to a traffic stop on New Franklin Road where members of a motorcycle gang were pulled over in a truck. One of the gang members was arrested for marijuana possession.

Stephens said a piece of gang literature, which is a set of codes for gang members, was also found in the truck. Stephens said it could be taken for them to understand the gangs.

“[Gang literature is] almost like their rules,” Stephens said.

“It basically says ‘hey, we have to wear these types of colors’ or ‘hey, you have to contribute in some sort of way.’”

Being in a gang isn’t a criminal charge itself, Stephens said. Gang charges can be applied when there’s proof that there’s intent to commit a crime.

“The way the gang law is there has to be a predicate crime that is certain criteria,” Stephens said. “It’s person-on-person crimes, property crimes and any type of drug charges. Now, generally what they have is just misdemeanor marijuana, so it’s just a small amount of marijuana that will go to city court. … There’s nothing against the law about being in a gang. It’s being in a gang that commits criminal activity [that’s illegal].”

During the unit’s patrol, Anderson recognized a resident who was just released from prison for gang charges.

Anderson reminded him that since he’s on probation, he cannot associate with any gang members.

“Essentially what we were doing there was checking on him, seeing how he’s doing,” Anderson said.

“That’s one of those mutual encounters, casual conversation, just encouraging him to comply with his probation, which is to not associate with other gang members.”

According to Winne, anytime someone who was convicted of gang charges is released from the prison system, they have a condition to not associate with members or associates of any criminal street gang.

“Essentially, we’re not trying to send you back to prison or violate your probation, so here I am reminding you of those terms that you signed and agreed to.”

Mom, daughter supporting one another after cancer diagnosis