Aiming for the moon 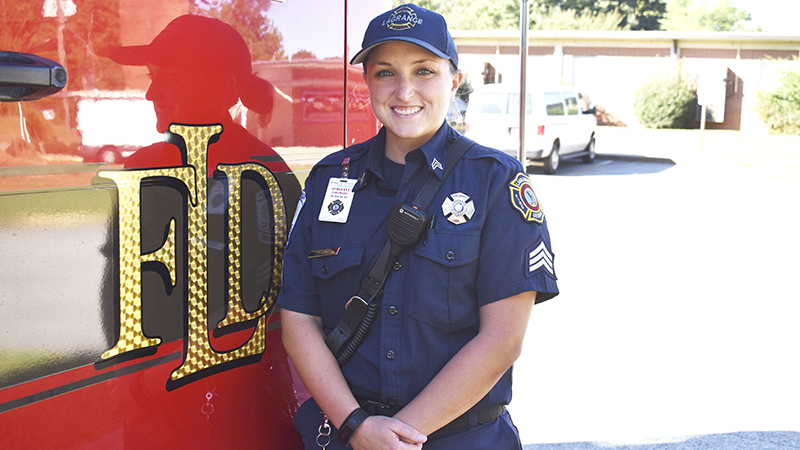 Even though she was hired by the LaGrange Fire Department in 2013, Sgt. Michette Moon got to relive being a rookie by participating in the department’s ten-week rookie school last year.

“I started in August of 2013,” Moon said. “[The LFD] sent me to the [Georgia Fire Academy] because there was going to be a big gap in hiring. I went and got my certifications there, came back here and worked. [In 2017], we finally got enough people to go to rookie school. I had already tested for sergeant, I just hadn’t been promoted.”

“There are tons more classes I want to take,” Moon said. “I don’t even know them. I can’t even name them all.”

Moon said while she has her career goal set next at working in fire instruction, she just wants to be the best sergeant she can be right now.

“After that, I really want to get into more of the instructing part (of the job),” Moon said.

Moon said she was always interested in joining the fire service because her father, Ed, was a firefighter. Moon started her career at Troup County AMR in 2010, and served as a paramedic there for three years.

“I always wanted to do the firefighter things,” Moon said. “It’s just where I found myself.”

Moon was promoted to sergeant in February this year.

As a sergeant, Moon drives and  runs the pump at scenes.

“[Making] sergeant in five years is not easy,” Moon said. “You have to really stay busy, but the good thing about this department is they’ll help you wherever you want to go. They’re going to push you toward it. They’re going to help, so I’ve had every opportunity to grow and to be better.”

Moon said one of her favorite memories was participating in rookie school last year with five other people. Her advice for the 16 firefighters participating this year is to take the opportunity to grow and be better while going through the school.

“Everything we do — it may seem hard at the time — but it’s going to make them better in the long run,” Moon said. “Right here this school makes you tougher, physically and mentally  You have to be just tough and willing to put in the work. You have to mentally tell yourself that you can do it.”

Moon said her favorite thing about working at the LFD is that they are like a family.

“They’re going to be there for you,” Moon said. “It’s great. But we also hold each other to a high standard too.”v

Answering the call to serve