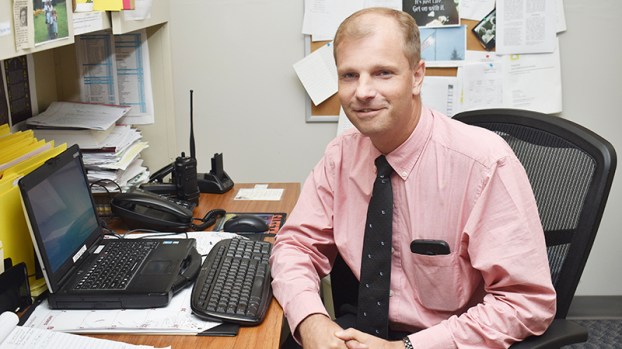 LaGrange Police Department Det. Jeremey Jones poses for a photo at his desk. Jones has worked at the LPD for 19 years, and works on property and peron-on-person crimes. --Gabrielle Jansen

LaGrange Police Department Det. Jeremey Jones was awarded the public safety person of the year at the Valor Awards earlier this month. The awards, which honored first responders for their works between July 1, 2017, and June 30, 2018, were presented at the LaGrange-Troup County Chamber of Commerce’s Early Bird Breakfast at Del’avant Event Center.

In the last year, Jones investigated two homicides and three cold cases. Jones closed a 2-year-old cold case where the suspect was arrested in Mobile, Alabama.

Jones was recognized for carrying out his work while dealing with an autoimmune illness. Jones said he first went to the doctor’s office for his health in November of 2017 but was formally diagnosed and has been receiving treatment since April.

“Once I got the correct medication right then, I was able to get it under control,” Jones said. “I’m great now.”

Jones said working full-time and dealing with his illness was challenging, but he pushed through it.

“I still have to go back and forth to the doctor,” Jones said. “I was going monthly, and now it’s down to every three months. It was difficult because there were days where I just felt really rough. But it was something that you push through and go on.”

A LaGrange native, Jones graduated from LaGrange High School in 1994 and joined the U.S. Army. After getting out of the army in 1998, Jones said he started working at a local factory and realized he wanted to do something that was military related. Jones was hired by the LPD in 1999. He worked in patrol and as the D.A.R.E. officer before making detective in 2003. As a detective, Jones works in property and person-on-person crimes. Jones said his favorite part of his job is seeing victim’s families satisfied after a crime is solved or a suspect is convicted.

Jones said challenges of the job include communicating with difficult people and some cases don’t have a “solvability factor.”

“Normally, the property crimes are the ones that are the hardest to solve because a lot of people don’t have their serial numbers and makes or models for the items that were stolen and so those are the hardest ones to solve,” Jones said. “The person-on-person (crimes) — usually you’re going to find someone who will talk who will tell you who did the crime. Those are usually solved pretty quickly, but we do have those that (are hard to solve.) Like, it took me two years to get to where I could solve one homicide. People didn’t want to talk, and when they did, you get a certain amount of information.”

Jones said he likes LaGrange because of the community support for the LPD.

“It’s small enough to where the community still gets involved,” Jones said. “The support that they give to us — that’s most of the time. I’d say about 99.9 percent of the people here support us, and our city council supports us. It’s just a great place to live. I grew up here, and I like that fact that I’m raising my children here.”

More than just a friendly face