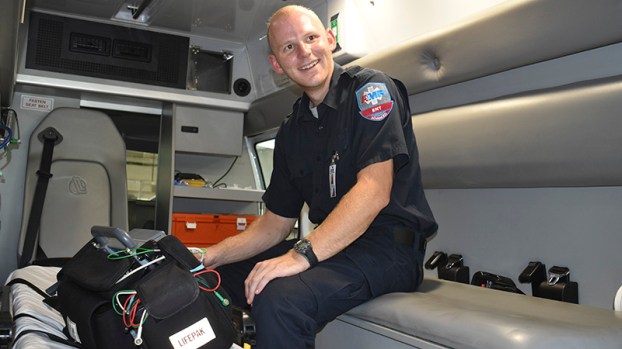 Zac Smith, a part-time advanced EMT for Troup County American Medical Response, tests one of their machines in the back of the ambulance. Smith has served with Troup County AMR for about five years. --Gabrielle Jansen

More than just a friendly face

“I know a lot of people. I worked at Parmer Brothers when Parmer Brothers Grocery was still open,” Smith said. “When you go out here on these calls, and people are worked up, or mad or they’re upset, or they’re having such a terrible day, somehow you can find a connection. Whether it be ‘oh you used to come in to Parmer Brothers or you used to do this or that.’ It just makes the whole situation so much better.”

Smith said from his former jobs to family members, there is always a way to connect with the patients he helps. Smith said he likes meeting people and making those connections in and out of his job.

“That’s what I really strive for. I try to make connections with people, and that way if something ever happens again, they need an ambulance, they can look back on a good experience with us and say ‘hey let’s call those guys back out there. They did good, that guy who was on there was great,’” Smith said. “That’s really what I do is I try to make it as positive of an experience as I can.”

Smith has worked at AMR for at least five years.

He is also a full-time firefighter with the West Point Fire Department.

In addition to running calls for LaGrange and Troup County, Smith said AMR also handles transports from hospitals. Smith said he just relies on his training when he goes on calls.

“We don’t get to stay inside because of an ice storm or rainstorm or hurricane coming through,” Smith said. “It’s a 365-day, 24-hour a-day kind of thing. You never know when the call is going to come. You have to plan your day for that, eat when you can, sleep when you can.”

In addition to connecting with patients, Smith said he also enjoys his relationship with other local first responder agencies.

“It’s so nice when you can pull up on the scene, and [there are first responders] who have known you since you were little bitty or somebody that you grew up with,” Smith said.

“It makes working together so much easier. Troup County, I think, is different from a lot of places where, everywhere you go, you’ll see a familiar face, whether it be at the police department or sheriff’s office or the fire department, city and county and I like it.”

Brian Lee, Troup County AMR operations manager, said while Smith is part-time, he works more than enough hours to be a full-time EMT.

“He’s definitely an asset to us, and we appreciate him,” Lee said. “I wish he was full-time, but he works enough hours to be full-time.”

On weekend nights, the LaGrange Police Department’s special investigations unit drives around the city to prevent crime and enforce the... read more