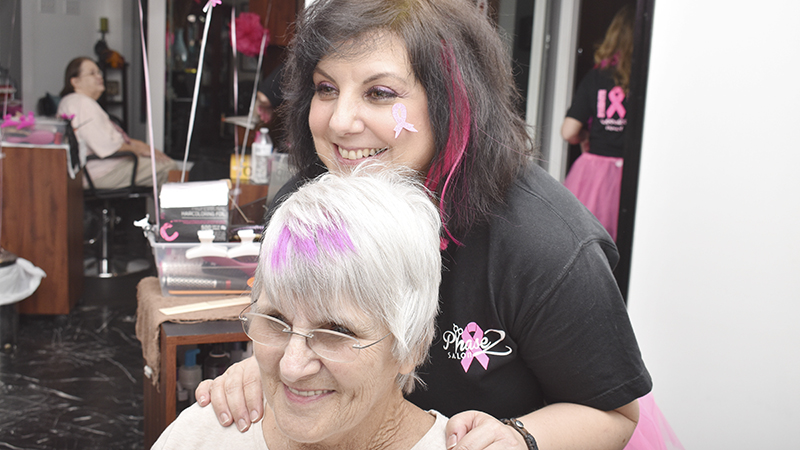 Pink hair streaks are in style for Saturday’s Paint the Town Pink and H.O.P.E. for a Day walk, and Phase 2 salon is raising money by coloring patron’s hair for the event.

Phase 2 owner Diane Mitchell said this is the third year they’ve colored pink streaks in customers’ hair, and all the proceeds go toward H.O.P.E. for a Day.

“We’ve expanded it this year to some pink extensions for people who don’t want permanent streaks,” Mitchell said.

About 100 people get pink streaks at the salon every year, Mitchell said.

Mitchell said the salon is a sponsor for this year’s H.O.P.E. for a Day event.

“We’re all women, and we work in an industry that should support other women,” said employee Shannon Norred. “This is the way to give back.”

Doreen Frankenfield has had her hair styled by the salon since it opened in 2001. Frankenfield said she’s been cancer free for a year.

“[When I was diagnosed,] I had my yearly mammogram, and they found a spot,” Frankenfield said. “I went back and had another one and they ended up doing a biopsy and found out that I had breast cancer.”

Frankenfield said she was diagnosed with breast cancer on January 9, 2017, and went through a lumpectomy, had lymph node removals, four treatments of chemotherapy and 33 radiation treatments. She was declared cancer free in September 2017.

Frankenfield said dealing with cancer is tough, but the LaGrange community is supportive. Thursday was the first time she got a pink streak.

“A lot of people in this town have been very supportive and helpful through all the different things that people go through,” Frankenfield said. “I didn’t know about this last year until I got up on the square for Paint the Town Pink and saw people had pink stripes in their hair and asked where they got it.”

Frankenfield said she was participating in the survivor walk Saturday.

“[The cancer] only showed up as a shadow on the mammograms and one of the surgeons at home said ‘you’ve got to look at it,’” Mullenix said. “It was fast growing, but contained in one lump.”

The Pink streaks at Phase 2 salon were only available Thursday.

TCSS learns how to stop the bleed