TCSS learns how to stop the bleed 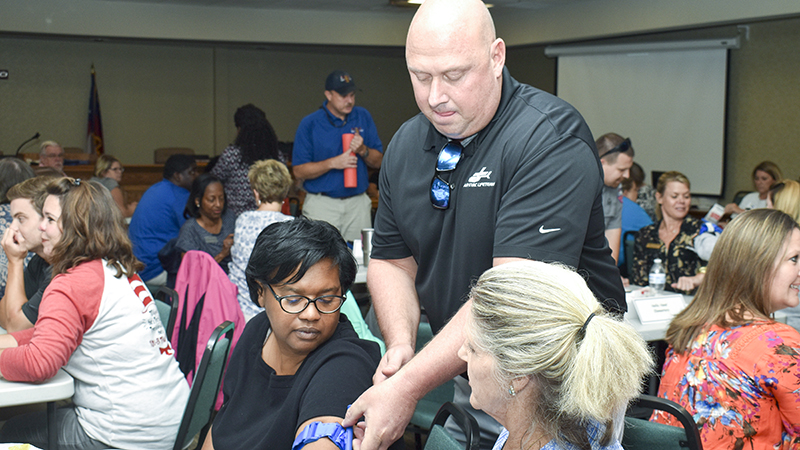 The Troup County School System hosted a stop the bleeding course during its annual safety training Thursday for school administrators and teachers. In addition to learning CPR and AED, TCSS staff also studied how to use a tourniquet and how stop major bleeding.

TCSS assistant superintendent John Radcliffe said this is part of the TCSS’s ongoing effort for safety training and security.

“We’re trying to get as many staff members trained in CPR and AED response as we can for each school,” Radcliffe said. “This afternoon session is focusing on stop the bleed. Stop the bleed is a program we learned about last year, and I went to a training in Heard County at the start of the school (year), and we decided to bring it to Troup County as well.”

“In a trauma patient, bleeding is the number one cause of death just because there’s no way to control it,” said Brian Lee, operations manager of Troup County AMR. “This is the simplest way to prevent death is just to try to slow the bleeding down, either through pressure and bandaging or tourniquets.”

The schools’ first responder teams, made up of staff, also learned how to pack a wound with gauze and practiced using tourniquets on each other.

“Anytime anything happens to a student or an employee, we’re the first to respond,” said Bridget Stanley, Berta Weathersbee Elementary School’s secretary. “I’m enjoying it because I’m gaining knowledge. We’ve been doing stuff wrong for so long and to be able to actually see how to do first aid, it’s wonderful.”

Radcliffe said they plan on taking the training to the rest of the schools’ staffs and will have a tabletop exercise on Oct. 17.

“To me it’s giving me hands on experience before a big serious experience happens, so I know the right procedures and steps to go through, so I won’t mess it up,” said Crystal Bolden, BWES’s paraprofessional.

Lee said the program started with the Georgia Trauma Commission. He said they hope to teach more people in the school system how to stop bleeding.

“We hope that this is just beginning of teaching the schools and teachers,” Lee said. “These are the nurses and first response teams that are going on right now and we hope that going forward we can move it into other public buildings.”

“At a school in today’s environment, if anything were to happen, an intruder came in and caused damage or hurt some of the kids, our ability to respond quickly is imperative.”

Radcliffe said the training has already been used in the state.

“What we were told, about a month or so ago, was that they’ve already used the stop the bleed on a playground somewhere here in Georgia where a child had fallen and broken their leg and their bone came through the leg, so it created the bleed,” Radcliffe said.

“They were able to get a tourniquet on, stop the bleeding and save his leg.”