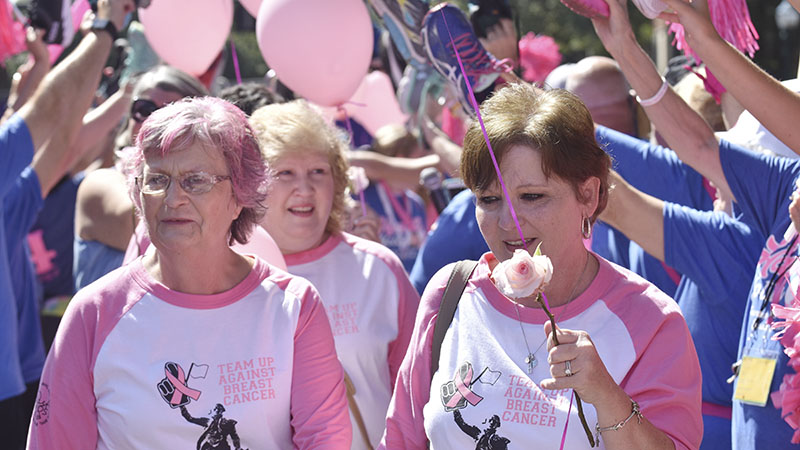 The 12th annual Paint the Town Pink and H.O.P.E. For a Day 10-mile walk was held Saturday in downtown LaGrange. When participants return to the square at the end of the walk, they form a tunnel by holding up one of their shoes. Breast cancer survivors finish the walk through the tunnel. --Gabrielle Jansen

Lafayette Square turned pink Saturday for the 12th annual H.O.P.E. for a Day and Paint the Town Pink event. About 70 people took part in the 10-mile walk and hundreds of people were at the square where vendors promoted women’s health.

Event co-founder Wanda Lowe said she and other women started the walk because they wanted the money raised to go directly to women in Troup County. The money raised helps breast cancer patients fund treatment and for women who need mammograms, in addition to going toward local health groups such as the West Georgia Cancer Coalition and District Four Public Health.

“It’s very important for us to make sure that that happens because we feel like early detection is the best opportunity for survival, and we want everyone to know that,” Lowe said.

“They found it at just one of the angles of the mammogram, and I was so thankful,” Drake said. “Had they not found it in the mammogram, who knows how far it would have gone?”

Drake’s husband James said the event highlights how many people are impacted by breast cancer.

“It touches more people than you realize because we know several people walking around who are breast cancer survivors just in this town,” James said.

The event also included free breast exams and vouchers for mammograms. Lowe said they want to empower women to take care of their health.

“Some people it will break them, but if you just have faith in it, it will make you something other than what you were,” Benefield said.

“Just because no one in your family has it — no one in our family ever had breast cancer — and because it’s not known does not mean you can’t have it,” Benefield said. “Be diligent whether you think it’s important or not.”

At the end of the walk near Lafayette Square, walkers and volunteers formed a tunnel by holding up one of their shoes. Breast cancer survivors finished the walk through the tunnel.

Breast cancer survivor Jessica Recny said she walked last year as a patient at the event and was excited to take part in the survivor walk this year. Recny was diagnosed with stage 2 cancer in June 2017 and was declared cancer free in January this year.

“I was pretty sick and in the middle of chemo, (but) I was able to walk,” Recny said. “It brings hope, and it brings light to people who are in dark places. You get to see survivors and fighters here. I get to encourage those and look at people who are fighting right now to say ‘look up because next year you could be a survivor. Don’t give up.’”

Raffles were also held, which Lowe said helps give grants to women for treatment. This year’s theme was “team up against breast cancer.”

“I think it’s very important because you see all over the town people like to put out the pink and they like to support the cause,” Lowe said. “One in eight women get breast cancer. … We just want to let people know that if they can get out there and find out about it as early as they can when it can be treated and cured, that’s the absolute importance of the event.”