Night out with area law enforcement 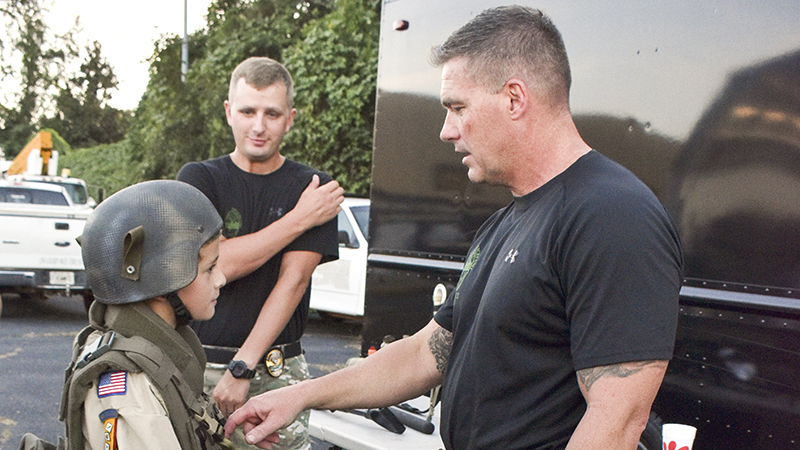 Local law enforcement gathered in the Beechwood Furniture Outlet parking lot on Tuesday for National Night Out, an annual event that aims to build relationships between law enforcement and the community. (Gabrielle Jansen | Daily News)

Firefighters with the LaGrange Fire Department showed off their trucks to the community, Troup County Air Evac let people climb into their helicopter, and the Georgia Bureau of Investigation hosted a demo tent.

LaGrange Public Safety Chief Lou Dekmar said they get more participation from the agencies and the community every year for the event.

“It just helps cement that partnership and makes working together more effective,” Dekmar said. “Then you create the opportunity for members of the community to have a non-law enforcement encounter with the police and also with fire and EMS, which allows that important combination of citizen contact and rapport that goes toward the whole notion of building trust and community policing.”

Taryn Diskin said she brings her children, Constance and Kingston Cleveland, to National Night Out every year.

This year, Diskin’s son, Kingston, attended the event dressed as a police officer.

“Last year he wanted to be a fireman, so last year, he was dressed up as a fireman,” Diskin said. “I think it’s important because it brings the entire community together to bond with law enforcement and other agencies in the area.”

The LPD’s emergency services unit had a display and let visitors try on their gear. Boy scout Nathan Steele said that was his favorite part of the event.

The City of LaGrange Animal Shelter brought adoptable dogs to the event, and the Jungle Bus bookmobile was also present.

“I happened upon it the year before last, and I’ve been trying to come every time since. It’s a lot of fun,” said LaGrange resident Estelle Stogner. “This being my hometown, it’s a far cry from what it was when I was a little girl. There’s a lot more to do here now.”

Gift cards were given out during the event. A DJ and A.M.E.N.A Fusion Dancers, a belly dancing group, performed.

“We just appreciate everybody coming out,” said Troup County Sheriff Sgt. Stewart Smith. “It’s a good event, good coordination for everybody, and we just love seeing everybody out here tonight.”