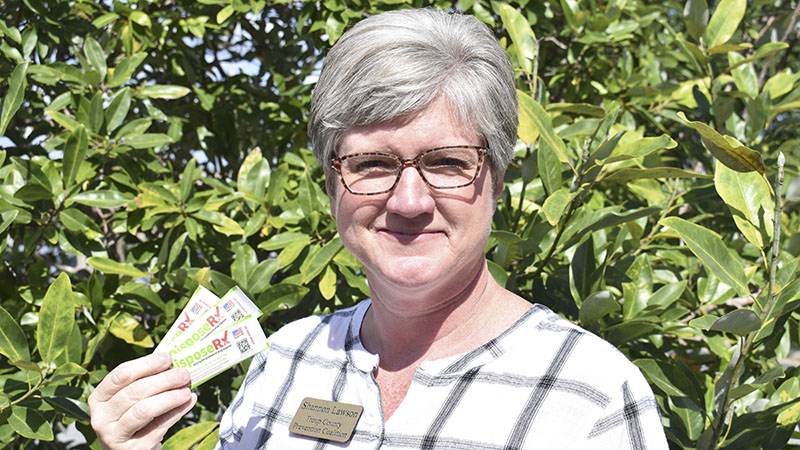 The Troup County Prevention Coalition was given a community grant to give 2,000 packets of DisposeRX to residents who can use them to get rid of expired or unused prescriptions. Above TCPC project coordinator Shannon Lawson poses for a photo with DisposeRX packets. (Gabrielle Jansen | Daily News)

The TCPC, which works to reduce and prevent alcohol, drug and tobacco use in Troup County youth, was awarded a grant to give 2,000 packets of DisposeRX to residents who can use them to get rid of expired or unused prescriptions.

The solution then forms into a gel and deactivates the medicine. It can then safely be thrown away, according to Lawson.

The TCPC was given about a $5,000 community grant by AmerisourceBergen Foundation to give 2,000 packets away to the community, Lawson said. The TCPC gave out packets on Tuesday at National Night Out and are making an appearance at the Confidence Missionary Baptist Church’s breast cancer health fair awareness event.

“[AmerisourceBergen Foundation is] a national corporation that has a foundation arm that gives grants to communities that fight the opioid epidemic,” Lawson said.

Prescription drug drop-off boxes are already available at all local law enforcement agencies. Lawson said that because of the drug drop-off boxes, the TCPC says every day is a drug take back day, and with the new packets, it adds another layer to the saying.

“Disposing of medicines when we’re done using them is so important, and then also locking those medicines up when using them in the home.”

Both the Walmart on New Franklin Road and Walmart Neighborhood Market on Lafayette Parkway are giving DisposeRX packets with pharmacy prescriptions. Ask your pharmacist whether they also carry DisposeRX.

Night out with area law enforcement