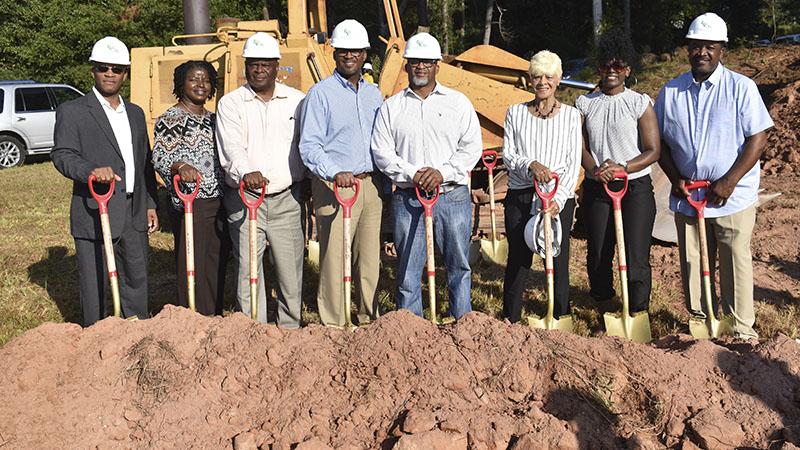 A ceremonial ground breaking was held Thursday at Lake Jimmy Jackson in Hogansville. The lake will have a prefabricated three stall bathroom installed in addition to lowering the lake level for construction to add a sand swimming beach, fishing dock and a paved driveway and parking.

Hogansville Mayor Bill Stankiewicz said former Mayor Jimmy Jackson decided on dedicating a Special Purpose Local Options Sales Tax for recreation at the lake in 2011. When Stankiewicz took over as mayor in 2014, one of the first things he did was name the lake after Jackson.

“For the past six years, we were collecting money, putting it in a bank, and now we’re finally going to get to spend it,” Stankiewicz said. “It was a fitting tribute to a man who has served this entire community for many years and many capacities. And he had an abiding love and concern for this lake.”

“I know my father would be proud of this,” Reginald said. “His whole life was spent on the board of education, as a council member and also mayor.”

Joe Walter, from Precision Planning, said the bathroom is being built in Nevada and will be set on the foundation. Torrance Construction Company has already started with renovation, Walter said.

“We’ve been working with the city trying to get restrooms at the amphitheater for a number of years, and it’s taken a lot of twists and turns,” Walter said. “We’ve got that going, and we’ve been working with the city on this project for a number of years, trying to get it worked out. There were a number of regulatory hurdles because this is a flood control structure, so the city was limited in what they could do. We’re all standing in the spill way of the dam. They’re very particular about what you can do in here, so that took some time to work through all of those regulatory hurdles, but we got it in place.”

Hogansville City Manager David Milliron said the bathroom at the lake will have remote control locks that can lock based on when the park is closed. Milliron said Lake Jimmy Jackson was the city’s source of drinking water until 2009.

Walter said the Lake Jimmy Jackson renovations should be complete by Christmas this year.

Cajen Rhodes, Troup County Parks and Recreation director, said they are partnering with the Georgia Department of Natural Resources to work with fish biologists and are looking into sampling the lake.