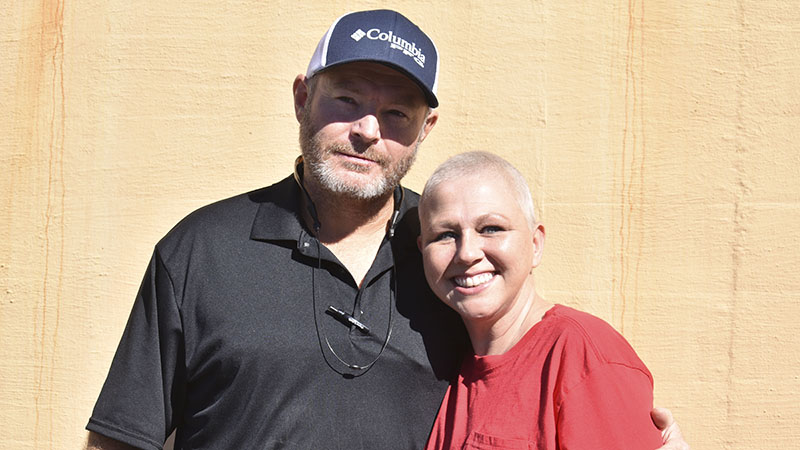 Stephenie Wegmann and her boyfriend, Avery Cason, pose for a photo. Wegmann was diagnosed with stage 3 breast cancer earlier this year. --Gabrielle Jansen

*** Editor’s note: This is the second part in a series of stories on the subject of Breast Cancer Awareness.

Stage 3 breast cancer patient Stephenie Wegmann is staying positive after finishing 13 rounds of chemotherapy. Wegmann said she was able to get through treatment with the support of her family and friends.

“[My friends and family are] very supportive,” Wegmann said. “[My boyfriend Avery Cason] is very supportive. He puts up with me on a daily basis, has been there for all of my doctor’s appointments and feeds me. He’s really taken care of me.”

Wegmann will have a double mastectomy this month and 35 rounds of radiation afterwards.

“I’m very optimistic anyway, so I guess that just came through with this too,” Wegmann said.  “I had a few days that were bad, but for the most part, I’ve been positive. I don’t know, cancer’s not going to beat me. [Cason], my mom and my sister have been there for everything.”

Wegmann was diagnosed with stage 3 breast cancer in April this year, although she said she found a lump in June 2017.

Back then, when she had imaging done, Wegmann was told it was benign.

Wegmann said the lump kept growing and growing and she was told she had a hematoma. It grew to the size of a grapefruit before Wegmann was finally diagnosed.

“It’s been a long road to get it diagnosed,” Wegmann said.

A Troup County resident, Wegmann was teaching special education at an elementary school in Muscogee County when she was diagnosed. Because she went through chemotherapy, she had to take leave from her job so she wouldn’t get exposed to germs.

“I was pretty positive through the whole thing,” Wegmann said. “Losing my hair was obviously kind of traumatizing, but I didn’t get the nausea and the vomiting that everybody got. I actually felt pretty good other than I had muscle and bone aches.”

Wegman said she was 39 when she was diagnosed and remembers waking up on her 40th birthday bald. Wegmann said she’ll have days when she’s strong and then have other days where she breaks down.

“Hopefully that was the roughest part of this journey,” Wegmann said. “I’ll forget that I have it, and then I’ll look in the mirror and then I’m like ‘oh yeah, you’re bald. You have cancer.’”

Wegmann said a struggle for her is letting people help her while she’s going through treatment.

Wegmann said this year was her first time attending Paint the Town Pink and H.O.P.E. for a Day in downtown LaGrange.

“It was neat to walk around and meet people who are going through the same thing that I am going through,” Wegmann said.

Wegmann’s advice for others diagnosed with stage 3 breast cancer is to stay positive.

“You’ve got to beat it, it can’t beat you,” Wegmann said. “You just have to mentally prepare yourself to be positive. It’s OK to have a bad day, cry, get it out, but then put your big girl panties back on and go at it again. That’s the biggest thing. The fight is mental, so you have to be mentally strong.”