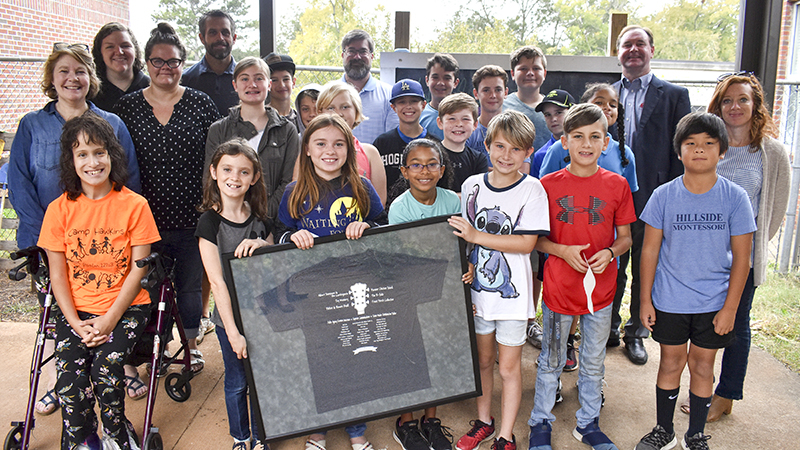 Hillside Montessori of LaGrange received music to its ears Thursday as members of Jack Straw Entertainment presented the school with a $3,187 check for its music and arts programs. The entertainment group raised money through its annual Summer Jam festival and donated this year’s proceedings to Hillside.

“Basically, this is our fifth year doing a music benefit, and it’s a sponsor-driven benefit that is centered around music and the arts,” said Barron Wood, co-founder of Jack Straw Entertainment. “Each year, we pick a different school in the community, and they’re the beneficiary of the event, and this year it happened to be Hillside Montessori.”

Jack Straw Entertainment co-founders Wood, Jason Weldon and Zak Knight recognize the influence of music in their lives and are trying to keep it in local schools.

“We all used to get together either playing music, listening to music or going to see music, and we would connect with each other doing that,” Weldon said.

“We realized as we were getting older, we don’t get to do that as much.”

Weldon said they picked the weekend around Aug. 24 to get together for music and then later wanted a reason for their get-togethers. So, they decided to raise money for local school arts and music programs.

“This will be a tremendous support for our music and arts program,” said Bethany Headrick, Hillside Montessori director.

“We value music and arts just as much as we do any of the academic programs at our school. All of our students begin music and art at the age of 2 and a half, which is our youngest student, and it goes through eighth grade.”

Wood said there are no strings attached to how the money is spent on the programs.

Headrick said she is not sure how they will spend it.

“We really think that you cannot provide a well-rounded education for children at any age without art and music,” Headrick said.

“I can see where it is a struggle to provide those things when finances come into play. Something like this is greatly appreciated.”

Rescue after the storm: Local animal shelter takes in…