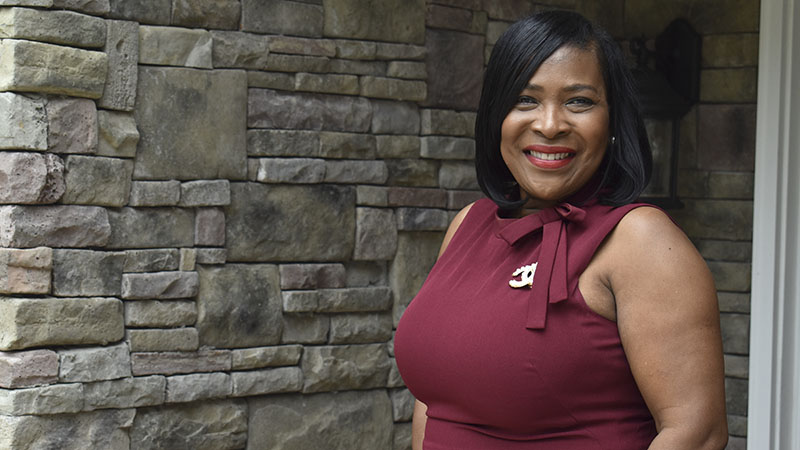 LaGrange native Angela White-Fannin credits God for being alive today. She was diagnosed with stage 3 multiple myeloma, a cancer of the white blood cells that can accumulate in bone marrow in October 2006. Currently, she is cancer free. (Gabrielle Jansen | Daily News)

LaGrange native and cancer survivor Angela White-Fannin says her faith is the reason she’s alive today, and she has a scar to prove it. When a surgery was scheduled to put a port in Fannin’s chest, she requested the doctor cut her twice to make a cross.

“He said, ‘Your insurance is not going to pay for me to cut you twice,’” Fannin said. “I said, ‘How are they going know you cut me twice?’”

Fannin said she usually wears clothes where she can show her cross shaped scar, and since she healed, she has given several talks about her treatment and faith. Fannin said she made a covenant with God that if she survived, she would tell people her story.

“I give God all the praise because without God, I would not have made it through this,” Fannin said. “My faith is what really kept me grounded, and, to me, it was like saying I’m coming off the major highway, I’m taking a detour through the woods, but I’m coming back to the main highway.”

Fannin has spoken at Ebenezer Baptist Church in Atlanta, the Columbus Civic Center and has been featured in an episode of “The 700 Club.”

Fannin was diagnosed with multiple myeloma, a cancer of the white blood cells that can accumulate in bone marrow in October 2006. Fannin, the wife of pastor Jerone Fannin, said her faith got her through her cancer, and she was able to spiritually grow.

“So many people who I went through with that cancer — multiple myeloma — all of them have passed on,” Fannin said. “So, I know that God left me here for a reason, and I know he wants me to go and share.”

Fannin said she was diagnosed after spitting up blood one day. She went to a local internal medicine doctor, who then sent her to a gastroenterologist.

After doing tests, the gastroenterologist thought she may have cancer and sent her to a hematologist-oncologist. She was diagnosed with multiple myeloma after a biopsy.

Fannin said even before she was diagnosed at the doctor’s office she felt that she was going to be OK.

Fannin’s treatment involved visiting a cancer center in Arkansas that specialized in multiple myeloma, chemotherapy and a bone marrow transplant. Fannin said she was diagnosed with stage 3 cancer at the time, but it was almost peaking at stage 4.

Fannin said one day God told her to repent and rededicate her life, and he would take her cancer away. Fannin said she slid off the bed and onto her knees and did what God said. The next day, the doctors told Fannin she had zero cancer count.

“When they started back with the numbers the next day, that’s when they came back and said that the numbers came in, and it said zero cancer count,” Fannin said.

Her blood was tested in three different labs and all resulted in zero cancer count. Fannin said at the time she was planning her funeral, what to be buried in and was giving away personal belongings to family and friends.

Fannin is planning to write a book about her treatment. Her advice for others diagnosed with cancer is to take a notebook and paper with them when they go to the doctor to write down questions as they come up.

“If they’re not your doctor, I wouldn’t listen to them because when people give you advice on what you should do, they don’t know your circumstance,” Fannin said. “Everybody who has cancer, each person is different what they’re going through. Listen to your body. Write down your questions, so when you get to the doctor you won’t say, ‘Oh, I forgot.’”

Fannin said those diagnosed should also be their own advocates and stay positive.