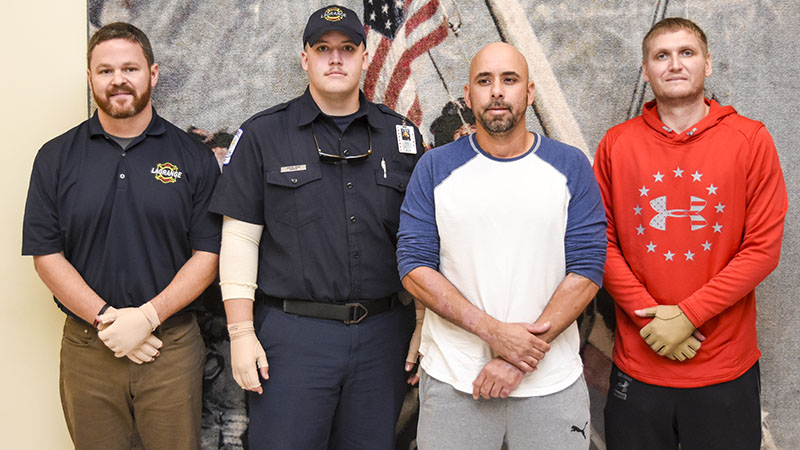 Four LaGrange Fire Department firefighters injured in a Labor Day structure fire said they have a different perspective on life after suffering second and third degree burns. Lieutenants Josh Williams and Jonathan Williamson and firefighters Pete Trujillo and Jordan Avera spoke publicly for the first time about their recovery Friday at the LFD’s headquarters on Hill Street.

“I was the pretty happy go lucky and always knew things could happen, but I’m 43-years-old…” Trujillo said. “You always hear it can happen to you and you know it, but you really know it now. You don’t take things for granted as much as you did and are a little more thankful and blessed and appreciate the things you have.”

The LaGrange Fire Department responded to a structure fire on the 300 block of Revis Street on Sept. 3. While in the house, the fire “flashed” on Williams, Williamson, Trujillo and Avera.  The four had to jump through windows to escape.

“It seemed to be a routine fire and things happened that we’re all going to learn from,” Williams said. “I know that there were some situations with the house that caused a flash over that we weren’t aware of when we arrived on the scene.”

The four were taken to Grady Hospital in Atlanta for their injuries. Williams was transferred to the Augusta Burn Center on Sept. 5, and was the last of the injured firefighters to be released from a hospital on Oct. 9. Williams said he received third degree burns to about 34 percent of his body, on his hands back, flanks and arms

Trujillo received burns to 25 percent of his body, on his legs, hands, arms, stomach and flanks. He said he had surgery and is now doing physical and occupational therapy.

Avera said while he is unsure what percentage of his body was burned, he received second and third degree burns to his hands, back and flanks. Avera is receiving occupational therapy and is back on light duty, working four hours a day at the LFD.

“It’s just a process at this point as far as getting back into the heat with our scars being so hypersensitive to cold and hot,” Avera said.

Williams, Trujillo and Williamson said they work part time jobs they cannot get back to due to their injuries.

Williamson said while they know the dangers of the job, they still want to do it

“I think we all faced a lot of challenges to get to this point in our career,” Williamson said. “It’s not easy to do this job — you sacrifice a lot just to be here on a daily basis. It’s what we love to do. We love to serve our community, especially now [because of the support] we want to give back even more.”

“I don’t think my doctors share that optimism, but hopefully I can get through my therapy well and start work again,” Williamson said. “I think I speak for everybody as we visit we miss coming to work and seeing people who we work with every day, seeing people in our community. It kind of keeps you getting up in the morning early to do what we do.”

In a previous interview, Public Safety Chief Lou Dekmar said other local fire departments have taken on extra shifts. Fire departments from across the country reached out to the LFD.

“We had visitors constantly in the hospital just checking in on us,” Williamson said. “It really did make time go by a lot better. It was easy to get through the day when people who care about you, love you come and visit you, take time out of their schedule to fundraise for you, visit you or check on you or family.”

The community has held multiple fundraisers for the four firefighters including motorcycle rides, fill the boot and a golf tournament. A GoFundMe for the firefighters raised $25,500.

Williams said the donations have helped and the support from the LFD and community has been “unreal.”

“It’s been amazing the support from the community, fundraisers, the department, other departments, surrounding departments that are close come together with our department doing fundraisers, golf tournaments, jeep rides, everything,” Williams said. “And then the Augusta Fire Department, while I was up there, they checked on my family every day.”

Avera said it was “eye opening” when he and Trujillo saw how many people attended the community Jeep and motorcycle ride to benefit them on Oct. 6.

Trujillo said they wanted to thank the community for its support.

“I never could have imagined the love and support we have got from this,” Trujillo said. “We never imagined it. It definitely means a lot to us.”