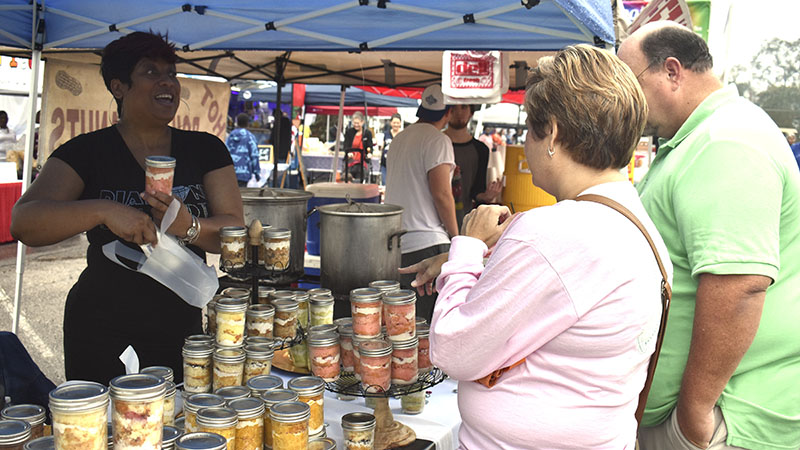 Hogansville Hummingbird Festival was held this weekend in rain and shine. Mayor Bill Stankiewicz said the city received multiple calls on Saturday asking if the festival was cancelled due to the on and off rain.

“We got our vendors in place before the rain started, which would have been a nightmare if the rain had started while the vendors were setting up,” Stankiewicz said. “We fielded several phone calls, ‘It’s raining here, is the festival still on?’ And it is, it’s rain or shine.”

Sunday’s weather was clear skies for the 21st annual festival. Thousands of people flocked to Hogansville’s festival on both days.

“The weather, it could be better with the rain today, but we’ll take it. We still got a good crowd,” said Troup County Sherriff James Woodruff.

Hundreds of food and art vendors from across the state and Alabama held tents at the festival. Angeline Eanes, owner of The Autumn Witch’s Inn, sold handmade witch hats, brooms and lotions. Eanes said she traveled from Alabama to attend the festival.

“I started out basically adorning store-bought hats, and I thought it would be better if I hand sewed them myself, so I started sewing, and I haven’t stopped,” Eanes said.

Eanes said she decided to sell her hats at the festival after hearing about it through work.

Tori Joyce, owner if Lazy J Studio in Griffin, said it was her second time attending the festival. Joyce sold upcycled flannel t-shirts and would even upcycle some by combining them with concert t-shirts she finds at estate sales or thrift stores.

“I do occasionally order a t-shirt because people want a certain artist or whatever, and I’ll order those online occasionally,” Joyce said. “We had really good sales and a great crowd the last time we were here, so we tried again.”

In addition to the vendors, Hogansville City Hall, which is housed the Royal Theatre was still painted green, the way Stalwart Films made it for filming “The Walking Dead” in September. Stankiewicz said since the city is refurbishing the theatre they wanted to leave it as it was, and had a walker make an appearance on the theatre’s balcony throughout the festival.

LaGrange resident Sarah Burek said she and he family have attended the festival for years.

“I think it’s really great to get people into the town,” Burek said. “I think it shows off the history of the town.”

Woodruff said the sheriff’s office helps with security every year at the festival.

“This is an exciting time for me in Hogansville. I always love to come up here and walk around and just getting to see the vendors, the citizens, the visitors and the mayor,” Woodruff said.

The proceeds of the festival go toward the Hogansville Charitable Trust, which funds the preservation of the city’s buildings.

“[The festival] brings so many people to our town, and they get a view of our city, and we’ve had several people who have started businesses here and moved here after coming to the festival. It’s a great tourism attraction for the county,” Stankiewicz said. “It brings out the citizens, and it brings out the visitors.”

‘We’ve been blessed by being able to have it…