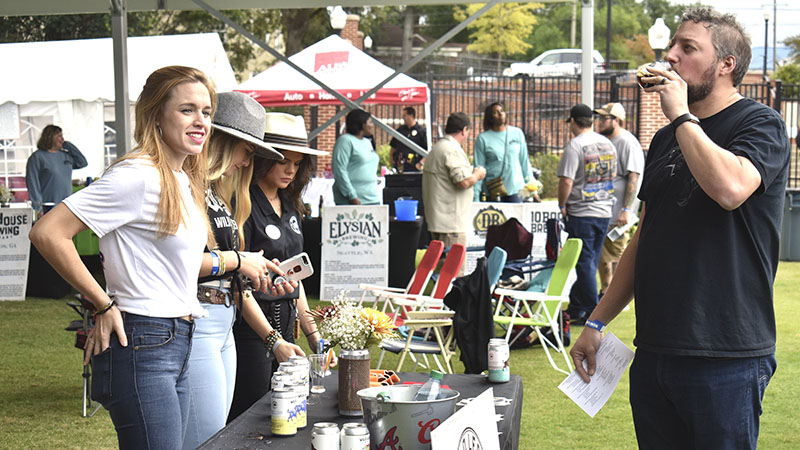 Gray clouds could not stop craft beer fans from attending the third annual Sweetland Craft Beer and Music Festival Saturday at Sweetland Amphitheatre. Breweries from Troup County, Omaha, Marietta Greensboro and even states from across the country, including California and Hawaii, took part in the festival.

Courtney Moody, market manager of Red Hare Brewing Company in Marietta, said the festival was more “hands-on” than other beer festivals she’s been to.

“I (work) other beer festivals almost every weekend,” Moody said. “This one just seems homier, like everyone knows everyone a little bit. They’re excited that other breweries have their tents up, and there’s food trucks and the live music is awesome.”

Ryan Benefield, from Wicked Weed Brewing, also said the festival was more intimate at Sweetland, especially considering some of the festivals he’s attended in Georgia are held in parking lots.

Musicians Daniel Donato, Donna Hopkins Band and Blair Crimmins and the Hookers performed at the festival.

“I never really thought of LaGrange as being somewhere that would have something like this, which is really cool,” said Newnan resident Alexander Rose.

LaGrange resident Neil Sherman said he and his friends have attended the festival every year.

“I’m just really excited the direction the city’s moving in with the amphitheater, and we now have two breweries,” Sherman said. “If you told me five years ago, we’d be at the third annual beer festival in LaGrange, I wouldn’t believe you, but I think LaGrange is moving in a really exciting direction.”

Mike Denehy, co-owner of Chattabrewchee Southern Brewhouse, said it was the first time the West Point brewery participated in the festival.

“We’ve had a line out in front of the tent the whole time we’ve been open,” Denehy said.

Columbus resident Ash Snow said he was able to try beers he had never heard of before at the festival.

“It’s a really good selection of beer, better than the local beer festival they put together in Columbus,” Snow said.

Denehy said the festival has put Troup County on the map in the craft beer world.

“We’ve had people from Atlanta, people from Montgomery, people from Florida who are coming in today,” Denehy said. “So people are coming here for craft beer instead of Troup County residents going somewhere else for it.”