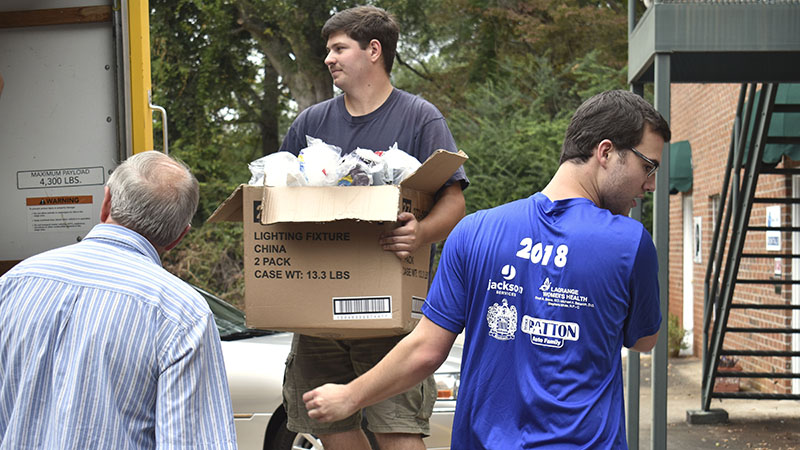 The Troup County Board of Realtors sent supplies to Donalsonville on Friday. --Gabrielle Jansen

The Troup County Board of Realtors sent a truck full of diapers, cleaning supplies, chainsaws, more than 3,000 pounds of water, over 1,000 pounds of food and more Sunday to Hurricane Michael effected city of Donalsonville, Georgia.

“Donalsonville is a population of 8,700,” said Grover Golden, a broker and manager for Coldwell Banker Spinks Brown Durand Realtors. “[Its] average income is $20,000 a year, and it is a mostly agricultural area. They were the first town in Georgia to get hit by the storm so consequently the worst town to get hit. They’re saying they may not have power for another three weeks to a month.”

Kathy Golden, a realtor with Coldwell Banker Spinks Brown Durand Realtors, said she contacted a former student who lives in southern Georgia and asked how she could help. Golden was directed to donating to First Baptist Church Donalsonville.

“When the hurricane happened, I prayed that God would show me how I could help, and I saw my [former student],” Golden said. “She was from southern Georgia and she put a post on Facebook about how the farmers were wiped out in southern Georgia, and I asked her how we could help.”

“It’s LaGrange. It’s what we do,” Golden said. “We are about family and helping each other and being there when we need each other.”

Golden said a friend from southern Georgia who was visiting sharpened chainsaw blades and labeled them so people would know how to use them before the truck was sent to Donalsonville.

“There are a lot of people who have helped in Panama City and Mexico Beach, but these are Georgia farmers. This is a very impoverished area,” Golden said.

Even Santa Claus made an appearance to help deliver the items.

Golden said the realty groups of LaGrange participates in adopting families for Christmas and fundraises for local groups with its annual barbecue.

“One of the things that I think is special about the realtor community is we’re almost like a little family. We call on each other to come together to support and help,” said Nicole Smith, a realtor with RE/MAX.