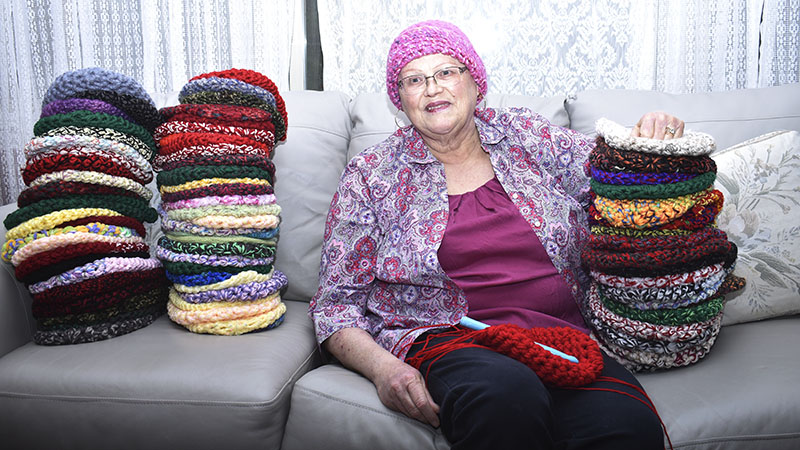 Editor’s note: This is the last part in a series on breast cancer survivors.

Every year, LaGrange resident Rebecca Hafner-Camp knits 100 caps and donates them to organizations. Even after being diagnosed with stage 3 breast cancer this spring, she has kept knitting, making a few for other cancer patients.

“I was working on one while I was having my chemo one day, and this lady kept looking at it, and she was freezing,” Hafner-Camp said. “She had this little cotton thing on her head, and she was just freezing. She said ‘oh that’s so pretty.’ So, I’ve given a couple away.”

Hafner-Camp said this year she’s donating caps to the local warming center and the Christian Appalachian project. She has been making caps for about four years. Even through her treatment, she continues to knit and has 11 hats to finish before completing her goal.

“When I started this last fall and then working through the spring — I didn’t have any idea that I would be wearing my caps,” Hafner-Camp said.

Hafner-Camp said she started noticing a lump in December last year and because of her type of cancer, it wasn’t easy to detect on mammograms. Hafner-Camp had gone through surgery, and finished chemotherapy this week. She said she’ll start radiation next week.

An organist for St. Peter’s Catholic Church in LaGrange and music director at Newnan Presbyterian Church, Hafner-Camp said she hasn’t missed playing a weekend since her surgery in April.

“I took a couple of Sundays to recuperate from the April surgery, but I haven’t missed a Sunday since,” Hafner-Camp said. “For me, it would have been worse to just do nothing. You have to take your mind off it sometimes if you’re able. Sometimes you’re not able to, you feel crummy, but I would definitely say to try to keep going otherwise what else do you have? ‘Oh, cancer. Nothing else,’ no work no traveling, nothing fun.”

Hafner-Camp said the only other person in her family diagnosed with breast cancer was a maternal grandmother who died from it in 1965.

“It’s hardest for the patient, and it’s also hard for the family to see somebody suffering in the sense of grief that it causes, especially with breast cancer. … You don’t know what’s going to happen,” said Jim Camp, Hafner-Camp’s husband. “But you have to believe that things are so much better now than they were a generation or two ago.”

Hafner-Camp said through her treatment, she learned it’s OK to ask for help from others. Hafner-Camp said she appreciated community members giving her family meals when she couldn’t cook.

“Ask for help, ask for anything you need, prayers because there are days you feel kind of low and people do want to help but they sometimes don’t know what to do. So the real basics, like bringing us food or bringing your mail in or anything.”

Hafner-Camp also advised others diagnosed with cancer similar to her is to talk to their oncology nurses and caregivers.

“I would also say don’t rely too much on googling things because there’s a lot of contradictory information,” Hafner-Camp said.

In the meanwhile, Hafner-Camp said she’ll keep knitting her caps, whether watching television or sitting in the church choir at church. She said next year, she’ll start donating them to other cancer patients and may start doing team colors.