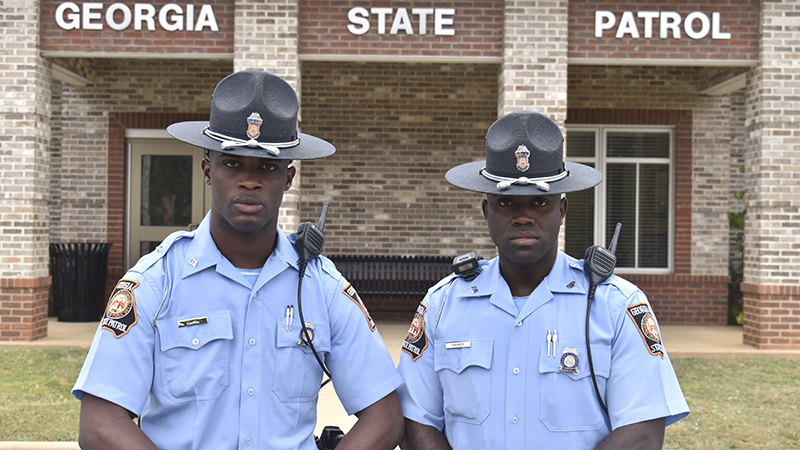 Smith, who’s from Alabama, said he applied to Georgia State Patrol after talking to his brother, Chattam, a former trooper himself.

Grimes, a retired U.S. Army veteran, said he served for 13 years and has always wanted to work in law enforcement. After meeting a GSP recruiter at a job fair, Grimes said he liked the level of the agency’s professionalism.

“Georgia State Patrol school was very challenging,” Grimes said. “Even coming from the infantry, 13 years in the army, a lot of things were tough and difficult for me. It’s a different training, it’s very parallel to the military.”

Originally from Liberia, Grimes’ family moved to Minnesota when he was 16. He joined the army a year after graduating high school. Grimes finished his military career in Ft. Benning.

Smith worked in manufacturing before deciding to join GSP.

Smith referenced the need to be out in the public and uphold the agency’s reputation as a few of the reasons he joined GSP.

“Just with the blue and gray, so much respect comes with it,” Smith said. “We’re the top standard, I want to be part of the best of the best.”

“Since I moved to the territory, it’s been pretty good,” Smith said. “Everybody is nice and friendly.”

Grimes said he looks forward to interacting with the community and helping others. Grimes said he is eager to work with other local first responder agencies as well.

“One of the things we do after trooper school is we go to a three-day class to learn how to install child safety seats the proper way,” Grimes said. “So, we’re going to get out there and try to look for some of those.”

Smith said he wants to make drivers’ days brighter when he encounters them.

“It’s not about issuing a citation or warning, it’s about your appearance,” Smith said. “Your appearance is everything.

“If I can change someone’s mind or talk to someone who’s been having a bad day and I can brighten their day up, I’ve done my job for the day.”

Outside of work, Grimes enjoys playing soccer and watching basketball. He said he’s hoping to mentor children at local schools when he’s free.

GSP Post #2 commander Sgt. Maurice Raines said he’s excited to have Smith and Grimes at the agency and thinks they will do well.

“I’m glad they will be a part of the law enforcement community and that we do have a great partnership with Troup and Harris County. I expect both of them to fit in well and do well when it comes to public safety,” Raines said. “We’re just excited that they’re starting today, and ask the community to be patient with them because they are learning, but I’m more than certain that they’re going to do a great job.”