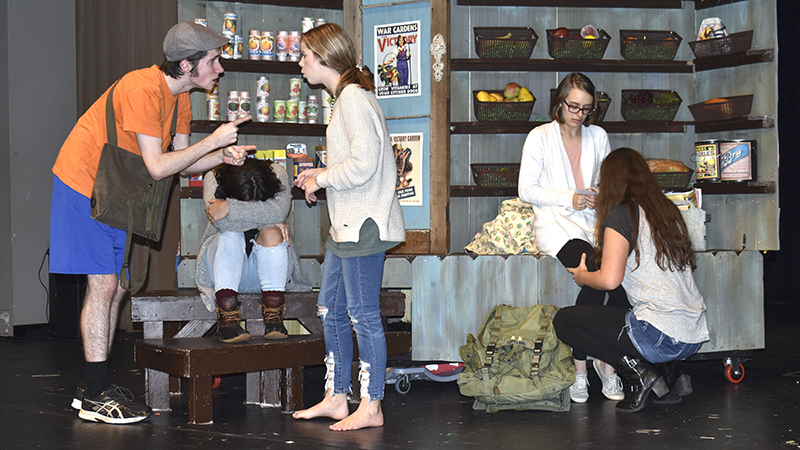 Troup County Schools theatre club will compete against seven other schools in the State One Act Competition Saturday. The students are performing “The Edge of Peace,” a drama that takes place during World War II. Above, students practice scenes from the show. -- Gabrielle Jansen

The Troup High School Theatre Club will enter stage right at the State One Act Competition this Saturday.

The club will compete against seven other schools at Washington High School in Sandersville with a one-act version of ‘The Edge of Peace.’

THS theatre teacher Noel Jordan said the drama is the third and final installment of characters in an Illinois town.

“It’s about a young man named Ricky who is fighting in World War II, and Ricky’s missing in action when the story opens up,” Jordan said. “His identity is mistaken and he ends up being pronounced dead. He actually is alive, but the townspeople don’t know it.”

Jordan said Ricky is living in the nearby woods, but the citizens think he is a German POW.

Senior Marissa Gonzales, who plays June Ricks, said it was hard to play an adult who’s gone through tragedy.

“To me I think the hardest thing to do was to reenact stuff that we have never experienced, but other people have experienced,” Gonzales said.

“Especially, with war and losing the people you love, that was really hard for us to do.”

Jordan said she had the actors read the previous plays to get to know their characters better.

“We’ve got a couple more days, and we’re working to really get our story solid and our characterizations down. We’re trying to be as true to these characters as we can be,” Jordan said.

Jordan also said the actors started rehearsing in September and have practiced six days a week, sometimes on Sunday as well. Jordan said they even made their set.

“I don’t think anybody at school spends more time (on their craft) than the kids in theater do. Even on weekends, there have been Saturdays where we’ve been here from 10 a.m. to 10 p.m.,” Jordan said.

Jordan said the last time the club went to state competition was two years ago, and they plan on doing their best.

“Overall, it can be very stressful sometimes because you’re going to perform a brand-new show for people who have never seen this who are also competing in the same region and state as you,” said senior Haley Jones, who plays Girl.

“It’s just one to remember, and it’s one of my favorite things to do.”