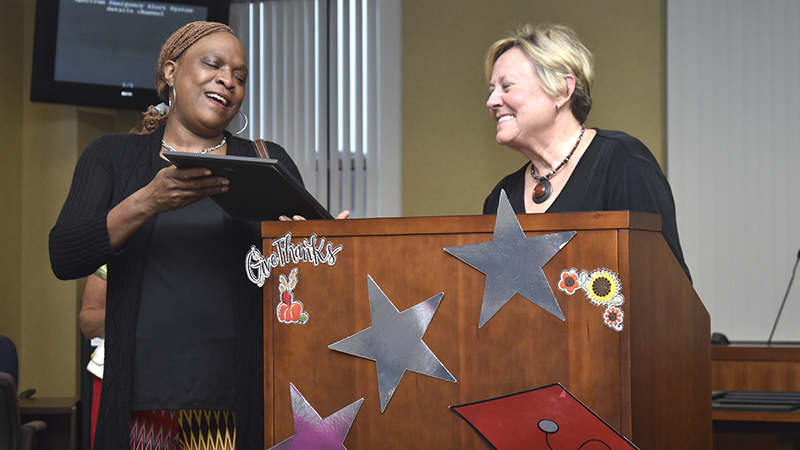 Ten people graduated from the Troup County DUI/ Drug Court program Thursday at the government center. The year-long program is an alternative court to help reform those convicted multiple times of DUI or drug charges to keep them out of the system.

O’Shay Smith, pastor of Communion Fellowship Ministry International, gave the keynote speech. He told graduates that while they may see themselves as addicts, God sees them as his creation.

“He never made any junk. Everything he made was good, and it was very good,” O’Shay said. “I didn’t mean to make this really preachy or churchy, but that’s who I am. I can’t help who I serve. … but I believe it was by his strength that you’ve been able to overcome.”

Denise said getting treatment is the key for participants to be successful.

“We have a fantastic treatment provider who helps folks learn tools to stay clean and sober,” Denise said. “The other part that is probably as equally as important is the structure that the program provides.”

Graduate Elaine Gates said to get through the program, you have to stick with it and listen to what the team is telling you to do.

“It gave me more understanding about life and being aware of how you can hurt someone or yourself when (you abuse substances).”

Denise said she believes the alternative court helps change participants for the better.

“The governor, at our last annual conference for the accountability courts, talked about how we’re in the redemption business, and I believe that that’s absolutely true,” Denise said. “And we see people come in with having difficulties with having their basic needs met, and we watch them come out on the other side of the program with cars, jobs, money in the bank and their family’s back. Just the massive shift in one’s life circumstance is what I love the most.”

At the last graduation in May, the court team created the Jeannette L. Little Star Award for those who work with and support the program.

They honored County Manager Tod Tentler, who is retiring later this month.

“What you won’t see behind the scenes are all the folks in the county who make this possible,” said Markette Baker, the Troup County Solicitor General. “Tod has not only been in agreement with what goes on with DUI court, but he has been an incredible supporter of DUI court, for all the alternative courts.”