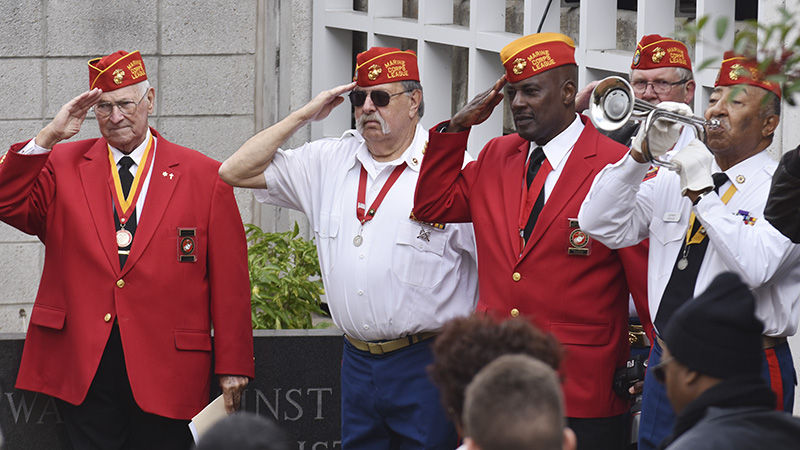 Veteran Johhny Griggs performs ‘Taps’ on the bugle at the Veteran’s Day ceremony.

A Veterans Day ceremony will be held Monday at the Troup County Veterans Memorial at 11 a.m. The event is put on by the West Georgia Veteran’s Council, which is made up of American Legion Post 75, Disabled American Veterans, Veterans of Foreign Wars Post 4629 and the Marine Corps League.

“We just want people to remember Veterans Day, and we also put flags out on Memorial Day,” said Bernard Bledsoe, a member of the West Georgia Veteran’s Council.

The program recognizes veterans of all U.S. wars in addition to laying a wreath and recognizing the council’s veteran of the year.

This year’s keynote speaker will be Paul Longgrear, a retired U.S. Army Colonel who served in Vietnam. Longgrear was inducted in the Army Ranger Hall of Fame in 2011.

“He did quite a bit when he was on active duty in Vietnam,” Bledsoe said. “(He received a) purple heart, served with other awards, and he lives in Georgia as a member of American Legion.”

Bledsoe said the event is a way to remind people that Veterans Day is more than just a day off from work.

“Too often, if people who don’t have a member in service, don’t think about how we got our independence, how we have maintained our independence and how we have maintained the integrity of the country,” Bledsoe said. “A lot of people just tend to let it slide to the back of their minds, and we think occasionally that people ought to be reminded that freedom is not free. It’s being paid for every day by somebody, and we don’t want the folks to forget it. We also want to recognize a lot of people who served.”