A LaGrange man wanted for multiple charges,  including aggravated assault, was arrested Wednesday night by the LaGrange Police Department. According to an LPD press release, officers responded to a call about a wanted subject on the 200 block of Cherry Valley Drive and found Helver Roblero-Meija, 24, at the scene.

“Officers actually went to Cherry Valley Drive and as they were speaking with some people over there, and they made contact with Mr. Roblero-Mejia,” said LPD Det. Charles Brown. 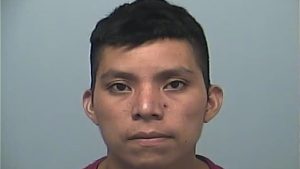 According to the press release, Roblero-Mejia was taken into custody without incident.

Roblero-Meija was wanted after allegedly cutting and holding a victim against her will at the 100 block of Lafayette Court on Monday. According to the press release, he was charged with aggravated assault, false imprisonment and possession of a knife during certain crimes.