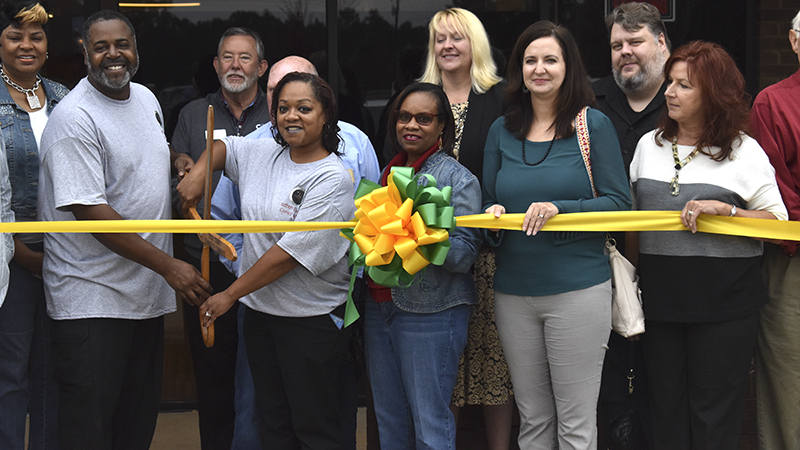 A ribbon cutting for Northern Exposure Coney Island and Cuisine was held Thursday. Above, owners, Taiwan and Alondra Garner pose for a photo with family and members of the LaGrange-Troup County Chamber of Commerce. (Gabrielle Jansen | Daily News)

A small taste of Michigan arrived in LaGrange this week as Northern Exposure Coney Island and Cuisine held a ribbon cutting at its restaurant on Lafayette Parkway. Owners Alondra and Taiwan Garner moved from Flint, Michigan last year and decided to open a restaurant that features Detroit and Flint Coney Island hot dogs.

Alondra said they originally moved to LaGrange last December to help her sister and brother-in-law with their church, Word of Grace Christian Center.

“We came to help my sister and her husband and their church, and we came for ministry,” Alondra said. “As we were looking for jobs, we decided to open our own business here. It was a part of home that we missed.”

Alondra said they had tried Coney dogs in Georgia, but it wasn’t same as the ones up north. She said they decided to share their culture with locals.

Alondra and Taiwan ran a barbecue and soul food restaurant in Michigan. Taiwan said while they are serving Michigan food, they will add southern dishes later to the menu.

“What we wanted to do was have, like my wife said, bring down our comfort food from up north but also we incorporated cuisine because we will do some classic southern foods as well at some point,” Taiwain said.

Northern Exposure Coney Island and Cuisine is located at 1300 Lafayette Parkway Suite C. Alondra said the hours will change, but are currently 11 a.m. to 8 p.m. Tuesday through Saturday and noon to 5 p.m. on Sunday.