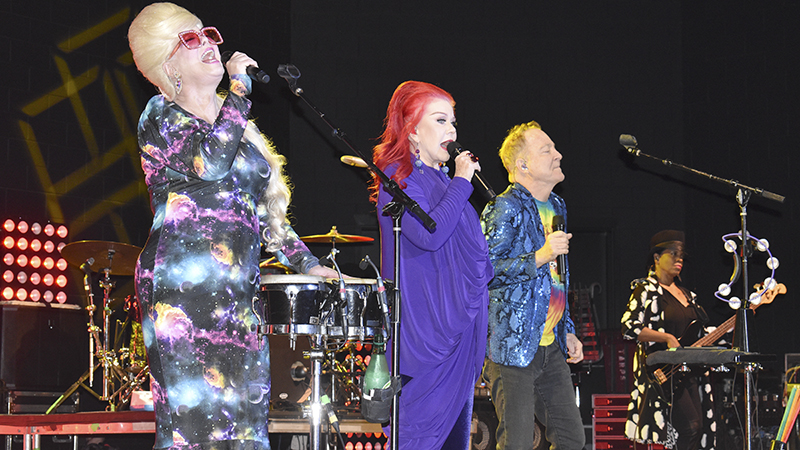 The B-52s performed Friday night at Sweetland Amphitheatre. The Athens based group drew in a large crowd and performed hits such as “Private Idaho” and “Planet Claire.” (Gabrielle Jansen | Daily News)

The B-52s headed down the Atlanta highway and performed Friday night at Sweetland Amphitheatre. Despite the cold evening, the amphitheater was packed with fans.

“With the weather, [the attendance] was good,” said Tammy Green, a volunteer with Sweetland. “I knew when they opened the gates not a lot of people were here, but they were waiting to get here at the last minute.”

Swanson said she and Etheredge have seen the B-52s more than 25 times around the country, and this was their first time in LaGrange.

“The first time I saw them was at Lakewood Amphitheater in 1985 or 1986,” Swanson said. “We were just remarking what a wonderful little town [LaGrange] is, and we need to come back during the day and enjoy it.”

Some other fans even wore lobster antennae headbands.

Tailey said this was her first B-52s concert and her favorite song was “Love Shack.”

“It references Athens and the Atlanta highway,” Tailey said. “My family, we have some fun family ties to that song, and I just absolutely love it.”

LaGrange natives Markette and Jim Baker said they brought their children, Jack and Nina Francis, to the concert.

“We’re 80s kind of kids, so this is a great fun thing to remember,” Markette said. “It’s so cool that Sweetland is here to get someone like the B-52s to come and sing and play. To get to see that act is really cool, I’m thrilled about it.”

“I don’t think there’s a single person on the planet who doesn’t like ‘Love Shack,’” Markette said. “It makes you want to dance.”