Honoring veterans through the storm at Government Center 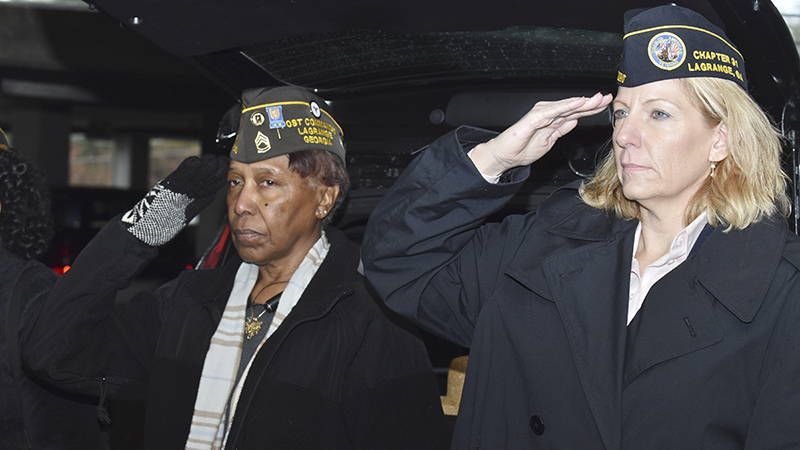 Members of Troup High School’s Air Force Junior ROTC started the ceremony bringing in the flags. The program recognized all veterans from all wars.

Paul Longgrear, a Vietnam veteran and co-founder of the Georgia Military Veterans Hall of Fame, was this year’s keynote speaker. Longgrear recognized those who served with him who died in Vietnam.

“The thing I’ve learned about veterans who have been killed or deceased after the war, as long as we keep their names alive, their memories are alive,” Longgrear said.

Longgrear also spoke on the hall of fame, and said they started inducting people in 2013. Longgrear encouraged the audience to nominate people from Troup County since no one from the area has been inducted in the hall of fame.

Mike Hudson, from the local American Legion post 75, was recognized at the West Georgia Veterans Council as veteran of the year. Hudson talked about how veterans always have a connection since they all served the country.

“Sometimes it seems like we get a little divided socially, economically or politically,” Hudson said. “However, one organization never seems to be divided — the United States veterans. Anytime you see a veteran or meet a veteran, they’re not a stranger… No matter what branch of service you served in and, like [Longgrear] said, no matter what job you did, it was important to the overall mission. Whether you were on the frontline or served as a clerk, or in transportation, you’re a veteran. You have that instant connection.”

Hudson also mentioned his favorite thing about serving, which was having a close relationship with those in his company.

“What I like most about being in the military is the band of brothers you get to know, and I know in Col. Longgrear’s speech he talked about different men and he talked about where they were from,” Hudson said.

“Colonel, I can remember people who served with me on the ship. Maybe I can’t remember their names, but I can tell you where they’re from.” 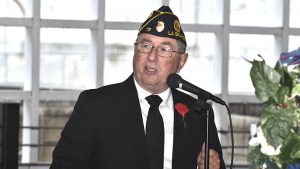 Hudson said he wanted the audience to remember the veterans who are currently serving this year while they are celebrating the upcoming holidays.

“This year as you’re sitting around that turkey dinner or around Christmas, and when you’re in the airport, Walmart or Kroger and you see somebody with one of these hats on, walk up, shake their hand and buy them a cup of coffee,” Hudson said.