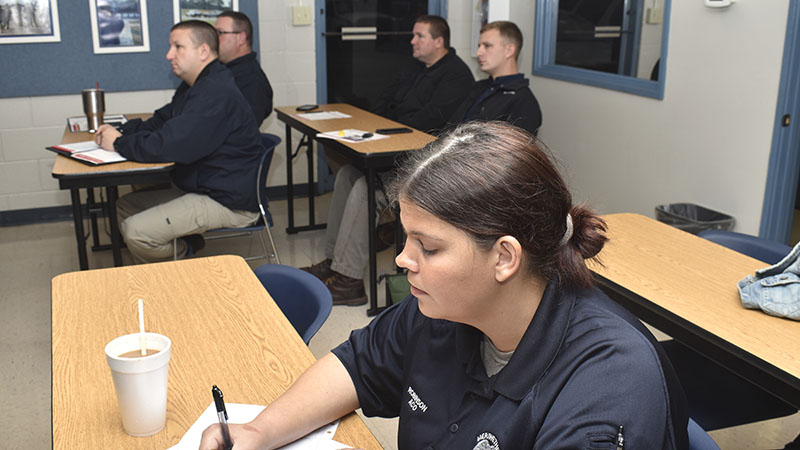 The City of LaGrange Animal Services held a training session on detecting animal abuse and dog fighting Friday at the LaGrange Police Department’s training center. Jessica Rock, director of legal advocacy and law enforcement support at the Atlanta Humane Society, talked about how animal abuse is connected to family violence, how dogfighting is harmful to children and the connection of those cases to gang, drug and weapons crimes.

“We know that if an animal at home is being abused that there’s a 76 percent chance that another family member is likely being abused as well,” Rock said. “It’s a free class that we offer, all [those who host it] have to do is provide a location for the training with power point capabilities, and we offer these classes to law enforcement, animal control officers, prosecutors, judges, veterinarians and vet techs. We often times have other folks who ask if they can come.”

Chris Bussey, LaGrange Animal Shelter supervisor, said about 20 to 30 people attended the class, including about five LPD officers. Some people traveled as far as Cherokee County to attend.

“This class was very helpful for me, and it opened my eyes a lot as far as what to look for with dogfighting investigations, especially since there seems to be a lot of it going on in Meriwether County. Some of it might trickle over into Troup or LaGrange,” Bussey said.

Bussey said the animal shelter assists Meriwether with animal cruelty cases when they ask for help.

Melissa Haller, intake supervisor for the Cherokee County Animal Shelter, said she brought some of the shelter’s employees, so they could understand how it connects to some of the animals they take in.

“I try to get all of them a little more into how it happens,” Haller said. “How what they do affects the dog and what the dog could have been in prior to ending up at our shelter.”

Haller said the class taught her what signs of abuse to look for.

“[The class] keeps everybody knowledgeable about what’s happening out there,” Haller said.

“It’s kind of like a silent crime thing. Nobody really looks at animals as being the victim, but like children, they don’t have a voice and somebody needs to speak for them.”