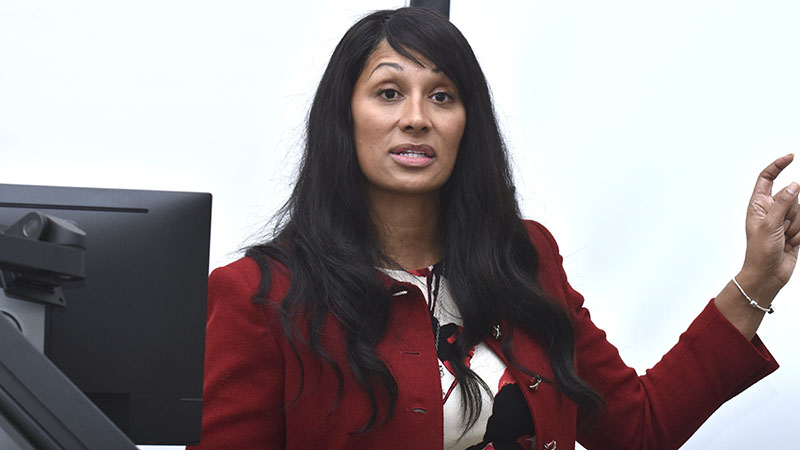 Ardelia Austin, the director of volunteers for Super Bowl 53, spoke at LaGrange College Thursday as part of the school’s sports management week. Austin talked to approximately 25 students about working on the Atlanta Host Committee and how they affect businesses and citizens even after the championship game is over.

“The economic impact is amazing, but you also have a lot of interruption to business,” Austin said.

Austin said the committee acts as a liaison between the city and National Football League.

Austin said every year, each host city tries to build off what has been done in the past, this year there will be a music festival in Atlanta.

Austin said when they plan for the Super Bowl, they want to leave the city with trends that last a long time. Austin said this gives them a chance to show off small businesses and citizens, noting 215 businesses were chosen to have a direct line with the NFL out of 1,000 applicants. Austin said they are strategic on inclusivity and holding up the city’s integrity.

The host committee is also deciding on 11 murals to be painted in the city that are specific to the surrounding neighborhoods.

“We have an off-the-wall project where they’ve selected lots of people to have murals throughout the city,” Austin said. “The people who have space came in said ‘OK, I’m going to donate my space’ and then we started the conversations. They had 41 conversations based on this. How are we going to utilize the space, how is it going to tell the story of our neighborhood? It is one of those things that will outlive the Super Bowl that will probably outlive lots of us.”

Other projects include sustainability with planting trees and partnering with the youth. Austin also talked about the volunteer program and said 19 colleges, including LaGrange College, will have volunteers.

“We have had the most applicants of any volunteer program in Super Bowl history,” Austin said.

Austin said the LaGrange College students will work with the NFL and some will correspond to the VIP population.

Austin also gave advice to the students and told them to say ‘yes’ to everything and find solutions when they are volunteering.

“Figure out a way to improve something you might want to tell your manager,” Austin said. “They’re probably at their wits’ end by the time they’ve got to you, however if you find a way to improve it and you can improve the system on site, people will take notice. Conversation goes a long way, being knowledgeable goes a long way, saying ‘yes’ and outworking everybody is the biggest thing.”