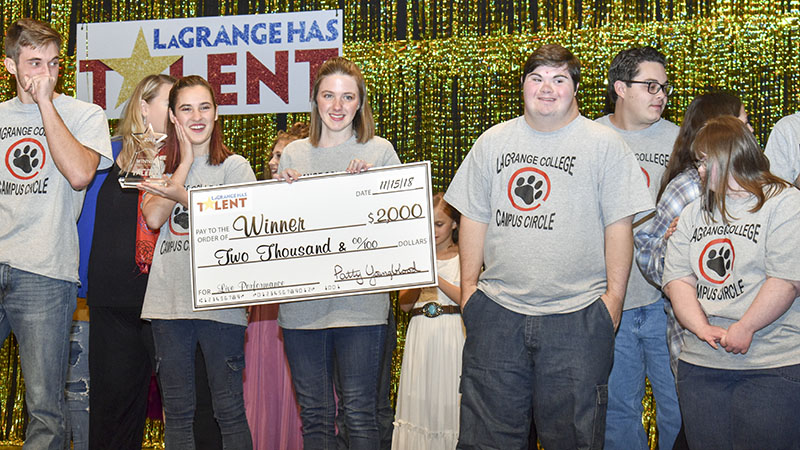 LaGrange Has Talent’s top ten performed Thursday night, where Our Circle and LaGrange College Campus Circle came out on top. The group performed a choreographed dance to “This is Me” from The Greatest Showman and received a standing ovation.

Trevor McLemore, president of the club, said this was their first time competing and they were surprised when they made the top ten.

“We are an outreach to students in the community who have special needs and we work to make them more involved on campus and allow them to have a fun time and get involved more with the college community,” McLemore said. “We were not expecting this by any means.”

As the winner, the group received $2,000 in addition to a trophy. McLemore said they will use the money to plant trees on their campus and on The Thread.

“None of us were expecting this at all, so it was a good surprise,” Tamara Rosencrantz, a circle club member. “We’re so proud of our LaGrange College folks, and we thank them so much for getting into this.”

LaGrange has Talent is an annual event that raises money for Babies Learning on Course for Kindergarten Success. The event is put on by the Magnolia Society.

While the total amount isn’t final yet, more than $20,000 was raised, according to LaGrange Has Talent founder Stephanie Preston. Preston said the funds represented a 40 percent increase over what they raised last year.

“This being our second year, to see that kid of growth has been amazing to us,” Preston said. “We’ve just been excited about the community participation in the voting phase, in the video phase and tonight here. We’re so excited about it.”

Preston said the event replaced their last fundraiser, Merry Market, to reach out to more people.

“We were looking for more ways to get our message out into the community about early learning, and we wanted to do something that was unique,” Preston said. 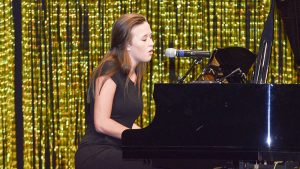 Eiland won $500 as the people’s choice awards. At the event, she had a fan section that cheered for her loudly.

“This was my first time (performing). I was very nervous,” Eiland said. “All of my friends, they have normally never heard me sing, but I invited them out tonight and they’re a big fan club.”

Eiland, who is ninth grader at LaGrange High school, said she may put $200 for her winnings into childhood education.

“I want to donate a little bit of it because this whole fundraiser has been for childhood education,” Eiland said.

“The Magnolia Society, the Women’s Leadership Council of the United Way of West Georgia, hosts this terrific fundraiser and we want everyone to know the money raised will go to local early education initiatives, like BLOCKS,” said Katie Van Schoor, LaGrange Has Talent chair for 2018. “We’re all volunteers who put on this event because we believe in this cause, and last night’s LaGrange Has Talent event just emboldened our spirits to continue this awesome event. We welcome anyone who wants to volunteer or learn more to give the United Way a call.”