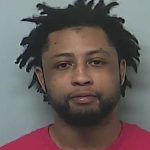 “He was on one of our work details in the area of Gray Hill School Road and he took off on foot and ran from the detail officer,” Smith said.

According to Troup County Webjail, Mitchell was arrested on Aug. 30.