‘Our Prayers Go With Them:’ Artistic tribute to veterans opens at The Suffering Artist Gallery in Hogansville 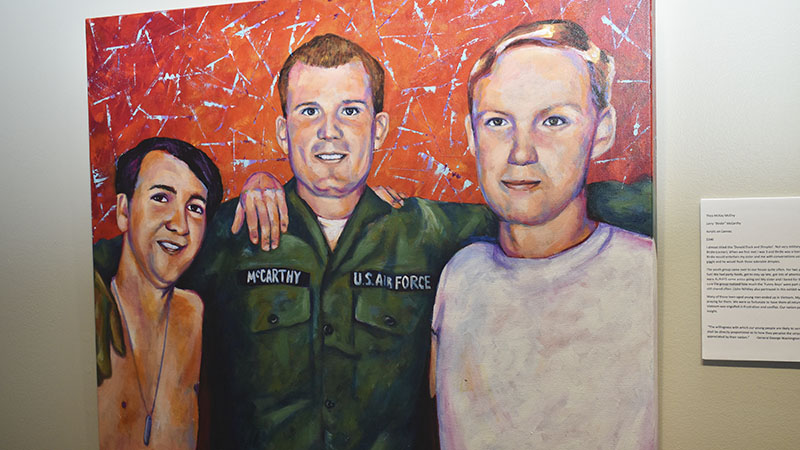 The Suffering Artist Gallery in Hogansville saluted military personnel this weekend after opening its annual veterans themed exhibition Saturday. This is the third year the gallery has hosted its veterans show, which also featured art by war veterans this year.

“I think it has wide appeal just because of its subject matter,” said Chris Swanson of the Suffering Artist. “We’ve been really surprised at people who wouldn’t normally be interested in art who have come to see an art exhibit like this.”

Swanson said originally he and his wife, Sarah, wanted to hold an exhibit that displayed military aircraft noses painted by veterans. After trying to arrange that, they ended up deciding to do an art show dedicated to veterans.

“It was actually just kind of a happy accident that it came about like this,” Swanson said.

Vietnam veteran Garland Jackson served in the Navy and was attached to the Marine Corps during his time in the war. Originally from Hogansville, Jackson said he left the city in 1967 to join the military.

“I never thought I would display my art in my hometown and Sarah (Swanson) has done a great job,” Jackson said. “I love her gallery.”

Jackson displayed photos he took in addition to a self-portrait that featured him in front of a graveyard.

“I took this photograph from the very spot where I got wounded,” Jackson said. “There were two people killed at the same time from this spot. I was in the hospital for 28 days and came back. The next day we jumped off on this operation, it was called Operation Dewey Canyon, and it was the worst operation in the war for the Marines.”

Jackson combined his photos with paint and made them look like they were framed inside a television, since Vietnam was the first televised war.

“They are a combination of painting and photography,” Jackson said. “I made a slide of these photographs, projected it onto the painting and then re-photographed it.”

LaGrange artist Thea McElvy painted photos of young men she knew when they served in Vietnam.  Her parents brought over teenage boys in their church youth group, and she and her sister remembered them as the “funny boys.”

McElvy said while she participated in a revolutionary war art project for the LaGrange Art Museum, she had to do a lot of research for her paintings on the Vietnam veterans.

“The best thing about this show is it’s not just about the art, the stories hang with much of the art,” McElvy said. “There’s a personal connection, and there’s also the history of it. There’s so much education in it, and I know from the pieces that I’ve done, there’s so much research put into it that I learned a lot from all of this.”

Artist Lori Harrell said this was her first time being included in the art show. She took photographs of World War II veteran Yancey Sanders and her uncle, Larry Butler, who served in Vietnam. The photos displayed pictures of the men when they were serving alongside their current day pictures.

“Mr. Yancey is a World War II veteran and his son and daughter-in-law go to church with me, and I wanted to photograph Mr. Yancey for this project,” Harrell said.

Sanders, 95, served in the Army Air Force on a B-24 Liberator in Italy. Sanders was serving on a mission when he was captured and made a prisoner of war.

“I had to make 35 missions and then I’d come home. I was on my 34th mission and we got shot down,” Sanders said. “I became a POW, but it was a short-lived stint, because we were at the end of the war. I was there for 39 days.”

The veterans exhibit will remain up through January.

“It’s been a very touching experience hearing his story, going over it in my mind,” Harrell said. “And then my uncle, he gave me a very short version of being in Vietnam because he said he had not spoken to anyone before about it and I got about five minutes out of him, which was OK, but five minutes was enough.”

Chalk it up to great art: DLDA and Wild…