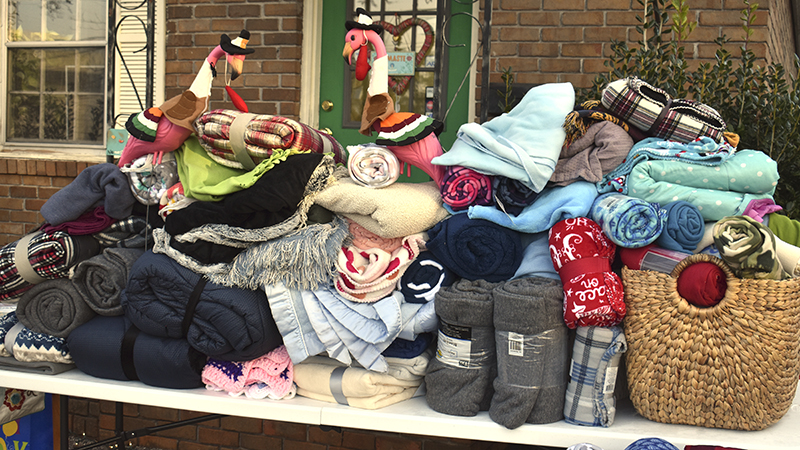 Recent blanket donations from the LaGrange Junior Service League and the Thanksgiving Turkey Trot will help people who stay in the LaGrange-Troup County Homeless Coalition’s Warming Center keep warm during the next few months. The warming center opens when the temperature drops to 37 degrees at night, according to director Mike Wilson.

“The warming center is housed at New Ventures, which is our break room during the daytime,” Wilson said. “And then at 5 o’clock in the afternoon, if the temperature is below a sustained 37 degrees overnight, then the warming center opens. It’s totally manned by volunteers, and we close at 8 in the morning.”

The warming center is a heated building, and the homeless can take hot showers, eat a meal and stay in a warm bed. Wilson said the center has only opened for three nights so far since the weather changed, but will be open Tuesday and Wednesday.

Wilson said the JSL collected 185 blankets outside the B-52s concert at Sweetland Amphitheatre earlier this month. Entry into the Thanksgiving Turkey Trot was donating a blanket. It is unclear how many blankets were collected at the race.

Wilson said the blankets at the Warming Center will be given to those who stayed at the center to take with them the next day. Wilson said they also give visitors personal care kits.

“Unfortunately, we would love to be open anytime it’s cooling down, but it’s just a matter of volunteers and limited resources to take care of that,” Wilson said.

“So, we have to do something because, quite frankly, a lot of people who are homeless, even at 37 degrees, don’t like to come out from under the bridge right out of the woods or where they happen to be.”

Wilson said in terms of donations, the center needs more food than items.

“We have blankets, and we have a lot of gloves on hand. The community was really good to us last year, and there’s a lot of stuff left over from that, but the biggest need that we come across now is really shelf stable microwave meals and frozen microwave meals, and drinks, soft drinks, canned drinks, fruit punch, that sort of stuff,” Wilson said.

Wilson also said he encourages the public to volunteer with the center. To learn more about the LaGrange-Troup County Homeless Coalition and the warming center, visit Tchomeless.com.