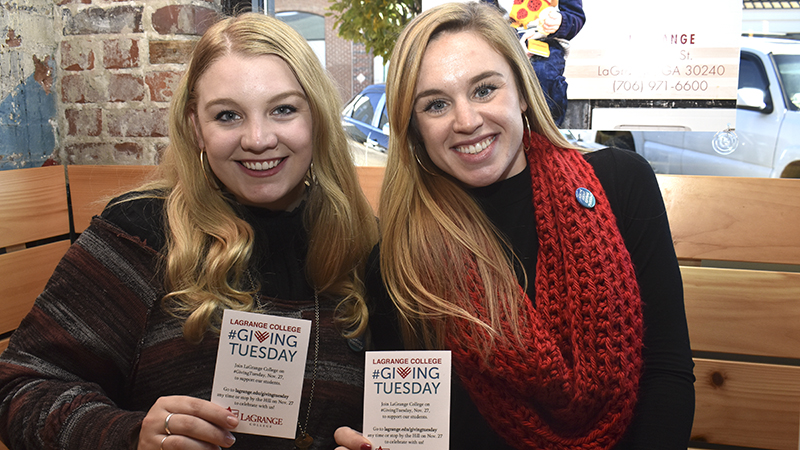 International event Giving Tuesday was recognized throughout LaGrange by multiple groups, businesses and nonprofits. Giving Tuesday is held after Cyber Monday, and encourages giving and donating to organizations, charities and causes that need support.

“Last year we did most of our fundraising via social media, peer to peer fundraising and all those great things,” said Annabeth Ivey, a gift fund officer. “A lot of our donors like to make gifts in person, so we wanted to make it a little easier for them.”

Ivey said the money raised goes to the LC Fund, which pays for scholarships, study abroad opportunities and even student resources such as printing paper at the library.

“The majority of my college was paid for because of the generosity of donors,” said Rebekah Lee, an alumna and gift fund officer. “Specifically, for me, I have a special place in my heart just because I directly benefitted as a student. And now that I work for it, and fundraise for it, I feel like I’m paying it forward.”

Ivey said their goal for Tuesday was to have 200 alumni participate. Lee said Giving Tuesday connects with students and alumni since they like being globally engaged.

Ivey and Lee spent time at Lafayette Square, Your Pie and at Wild Leap Brew Co.  Mark Davis, LaGrange College director of development, said the yearly fundraiser was getting bigger and better.

“Giving Tuesday is a way to give back some of the wonderful benefits that we have here in LaGrange, and support the students in a way to help with their education is something that’s bigger and better than ourselves,” Davis said.

For Giving Tuesday, Your Pie LaGrange donated 10 percent of all of its proceeds to Young Life LaGrange, which reaches out to local youth in the community. Bob Rosato, Your Pie LaGrange owner, said they didn’t have a financial goal, but the business wanted to help the group as much as they could.

“We partnered with them in our other store in Peachtree City in Fayette County Young Life, so we’re kind of familiar with the work that they do, and we’re really excited to do it here,” Rosato said. “I know that every dollar matters to them in terms of what they do and how it impacts the community, so the goal is to give them as much money as we possibly can.”

“The money raised today goes toward our annual budget, which helps support two full-time staff, and we have 26 volunteer leaders who are working adults and college students,” Crawford said. “So, it just helps go toward our budget and what we do with kids year round.”

Circles of Troup County, which teaches locals how to move from poverty to self-sufficiency, raised money on Facebook. Sherri Brown, director of Circles, said the donation they received would be doubled by matching sponsor, Richard Ennis, who was donating personally through New York Life.

“Last year we had one of our staff members who held her own personal fundraiser and she sent people on her page to our donation page on the website,” Brown said. “This year we actually applied with Facebook to their Giving Tuesday program, which entails a lot more work.”

Brown said every dollar counts since Circles of Troup is a nonprofit.

“We don’t have a huge budget, but we have to raise 100 percent of that budget every year,” Brown said. “So, it’s just a great way to connect with the community to put our mission out there to the community as well and to raise some pretty significant funding. With our matching donation, by the end of the day, we expect to raise at least $2,500, and that’s a lot of money.”