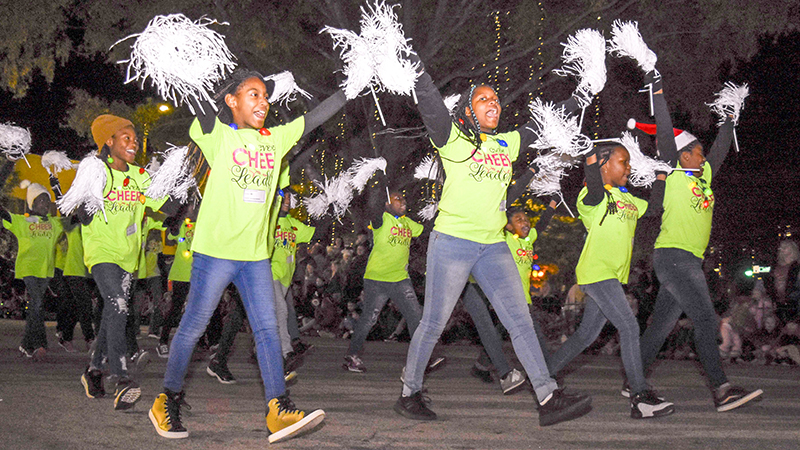 The Christmas season was ushered into downtown LaGrange Thursday night with the city’s annual parade. This year’s theme was “Miracle on Main Street,” and Bobby Carmichael, the former executive director of Downtown LaGrange Development Authority, was the grand marshal.

“This is always one of the most fun events of the year,” LaGrange Mayor Jim Thornton said. “We gather. We anticipate the Christmas season and we do so with not only the ceremonial tree lighting, but then with a parade as well.”

Before Carmichael pulled the lever to light the tree, Thornton compared the parade’s theme “Miracle on Main Street” to all of the work Carmichael did for downtown LaGrange.

“All throughout downtown there has been miraculous transformation, and I know that he’s going to get up here in a minute and deny that it was him who did it, but the one constant throughout this transformation has been Bobby Carmichael in his leadership of the downtown development authority,” Thornton said. “He guided our community through all of these complex, complicated, sometimes delayed but ultimately successful projects. We as a community, those of us who value downtown LaGrange, those of us who value Main Street and what this part of our community represents for the City of LaGrange, owe an eternal debt of gratitude to Bobby Carmichael.”

Carmichael thanked those who helped create and change the downtown into what it is today, and thanked all of the city workers.

“It took a lot of people to make it happen, and I’m honored to be the grand marshal tonight,” Carmichael said. “I feel in part I’m representing all of you.”

Carmichael said it is the citizens who make the downtown area vibrant.

After lighting the tree, the streets of downtown were filled with people waiting for the Christmas parade. This year, there were 96 units in the parade.

Troup High School senior Chalice Allen, 17, said she has watched the parade every year, and was looking forward to seeing her school’s marching band.

“This is one of the biggest excitements that we have around here,” Allen said. “It’s pretty amazing, the whole town comes together and we celebrate and join together as one community.”

Horn said the parade gets better every year.