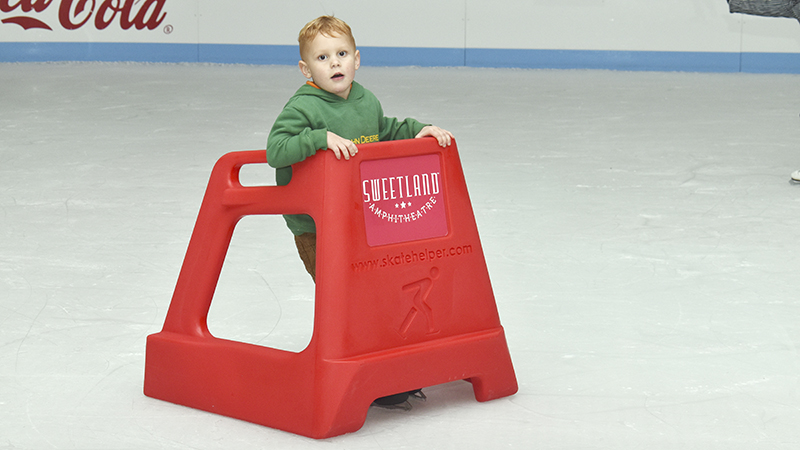 Sweetland on Ice held its grand opening Friday night with its Christmas tree lighting. This is the second year Sweetland Amphitheatre at Boyd Park has hosted an ice rink, and the attraction includes local food vendors this year.

“It’s another fun thing to do during the holidays. The community embraced it last year, and we were so happy to hear that we were having it again,” said Barbie Watts, director of promotions and marketing for the Downtown LaGrange Development Authority. “We’re happy to bring it back. Lots of people enjoy bringing their guests here during the holidays.”

The opening on Friday included ice staking performances by skaters from the Columbus Figure Skating Academy. Coaches from the academy were on site to recruit local children.

Ice skating coach Robbie Przepioski said they plan on coming to Sweetland on Ice a few more times this year.

“[Sweetland on Ice] is very cool, very nice, very pretty. It’s one of the best outdoor rinks that I’ve seen so far,” Przepioski said. “I really enjoy this and it’s very nice.”

LaGrange resident Diane Cushing said skating on the local rink is not like skating in an indoor rink.

“Real ice is a little easier (to skate on) than fake ice,” Cushing said. “I fall a little bit more on the fake ice than the real ice. I love to ice skate, it’s good exercise. It’s something to do, it keeps me active.”

Watts said not much has changed for Sweetland on Ice, other than the fact it is being operated by the DLDA instead of Ice Days.

“It’s so fun to see it all come together, and it’s taken many people, many hours this week to make it happen,” Watts said. “So, we’re so grateful to the City of LaGrange for their crews helping us and to Jackson Services, who helped us freeze the water so we have ice to skate on. We’re also grateful to the DLDA staff and (Sweetland on ice staff and volunteers).”