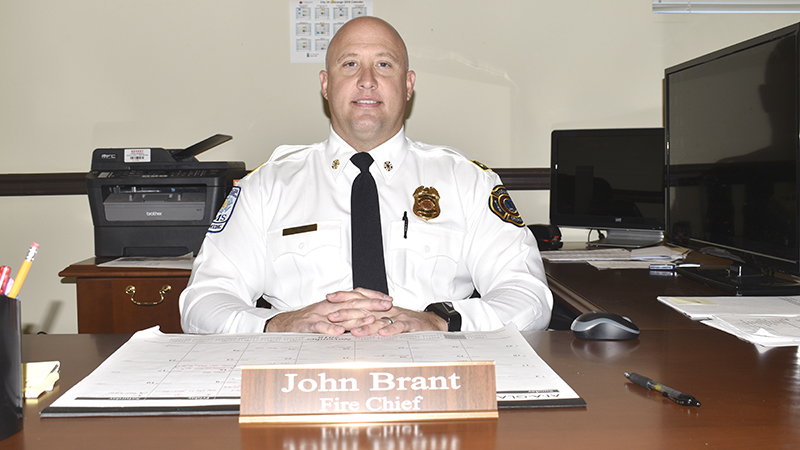 It was a busy first week for new LaGrange Fire Chief John Brant, and he already has big plans for the department’s future.

“It’s a very exciting time for me and for the department,” Brant said. “I feel like I’ve got the backing of the folks here at the fire department.”

Brant replaced Lou Dekmar, who served as both the LaGrange Police and Fire Chief for more than a decade. Dekmar, who has been the LaGrange Chief of Police for 23 years, will now focus solely on the LPD.

Brant has served with the LFD for 23 years. Brant said the LFD was already in a great place when he took over for Dekmar.

“He has definitely put us in a great position,” Brant said. “But I want to continue on with professional development making sure we’re creating an environment at LaGrange Fire Department where people can develop and grow as people and as employees. They can prepare themselves for advancement either within their own rank or their next rank.”

Brant said his main goals are keeping up the LFD’s accreditation score and reaching out to local leaders and business owners. The LFD received accreditation in August from the Commission of Fire Accreditation International. Brant said keeping that and the department’s Insurance Service Office score is one of the biggest things he wants to focus on as chief. The LFD’s score, which is at a two, means they have a fast response time, which lowers insurance premiums for residents.

LFD Sgt. Mike Webb works as the manager for the fire department’s accreditation. Brant said he is having the deputy chiefs, Willie Bradfield, Chad Dallas and Phillip Rice, assigned to an area of accreditation to make sure the right paperwork is turned into Webb.

Brant said every member of the LFD is a part of the accreditation process.

When Dekmar was the city’s Public Safety Chief, the LFD had four deputy chiefs to help run the department. Brant, who was previously a deputy chief, said he’s keeping the three other deputy chiefs, who will report to the administration every day.

“We’re going to keep that, so each deputy chief is over a battalion. They’ll still have their administrative duties that they’ll be doing, and they’ll also be running their shifts,” Brant said.

Brant said he also mainly wants to focus on meeting local figures and business owners to discuss what the LFD can do better when responding to fires and meeting their expectations.

“I’m really big on having plans, so we’re going to establish another 5- and 10-year plans, which goes along with the accredited process, and establishing a strategic plan,” Brant said. “I want to establish committees for different areas.”

Other plans include continuing relationships with the Troup County Fire Department and West Point Fire Department. Brant said he is also looking forward to the completion of fire station five, which will be beside WellStar West Georgia Medical Center, and the burn building, which is being laid out on Lukken Industrial Drive.

“[Station five is] one of the things that moving forward we want to see get done as soon as possible,” Brant said.

The LFD is rezoning coverage from stations two and four, which are on Aerotron Parkway and Mooty Bridge Road, to accommodate station five. Brant said they also need to hire seven new people to have enough firefighters for the new station.

“I think we’re going to be able to move forward, and just like any other organization is staying focused, and I think maybe that’s one of the things we need to concentrate on,” Brant said.

Brant said he is also focusing on the department’s emergency medical services curriculum, and they just started holding EMT classes. Brant said they want to hold the classes every year.

Brant said he also wants to increase fire safety in public education at the middle school and high school level.

“I think we do an outstanding job with our young and our elderly, but also I think we need to do a better job in our middle schools and high schools,” Brant said. “Also, we can use it as recruitment. Hopefully we’ll go out there and meet with middle schoolers and high schoolers, whether it be job fairs or whatever it may be and spark some interest in them and become firefighters someday.”

Lastly, Brant said he wants everyone in the department to know that their voices matter.

“All these plans that you can put together are great, but I think the most important thing is to work hand in hand with every member of this department and get involvement from the top to bottom, bottom to the top and making sure that every employee feels that their opinion and that their voices matter,” Brant said.