It’s a Wynne, Wynne: Father, son together at LaGrange PD 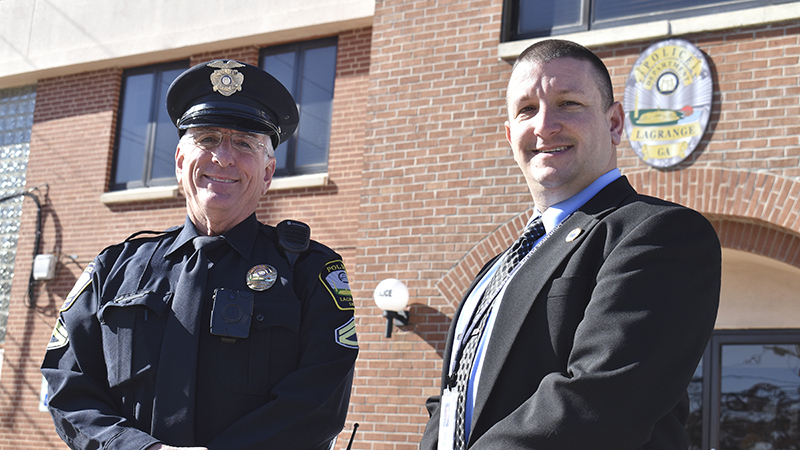 Cpl. Norm Wynne and his son, Det. Ley Wynne, have each worked for the LaGrange Police Department for more than a decade. --Gabrielle Jansen

As a detective at the LaGrange Police Department, Ley Wynne always listens to the monitor when it goes off. However, when he knows his father, Cpl. Norm Wynne, is working, he’ll listen to his monitor a little more closely to know he’s OK.

“We’re very fortunate that God has provided for us the love that we have for each other, and the strong family bond that we have,” Ley said. “And we both know that without God in our lives, none of this would be possible. We have great families. They’re very supportive of us, of what we do despite the inherent danger that the job entails.”

Both Ley and Norm Wynne have worked for the LPD for more than a decade. In fact, the family’s career in law enforcement began when Norm worked as a reserve deputy for the Hillsborough County Sheriff’s Office in Tampa, Florida.

“My family was in the citrus and dairy business from Florida,” Norm said. “I’d always had an interest in law enforcement and that gave me an opportunity to participate in it while I was still working in the family business.”

Norm later moved with his family to LaGrange to attend LaGrange College, where he earned a degree in business administration.

He then worked at Milliken and later bought a printing company with his wife, Patsy.

Norm reentered his law enforcement career in 2000 when he joined the police academy, and began work at the LPD in 2001.

“My wife and I owned a printing company for several years, and then I had the opportunity to actually get into law enforcement full time,” Norm said. “So, I went through the assessment process, and things have worked out extremely well.”

Norm currently is a field training officer and works in the patrol division at the LPD.

Ley participated in the Troup County Sheriff’s Office’s explorer program in high school, and graduated from LaGrange High School in 1997. He worked for Troup County 911 for two years before going through the police academy in 1999.

Ley then worked for the TCSO for about six years before transferring to the LPD.

“From seeing pictures of dad from when he worked at Hillsborough County and hearing stories he would tell, I’ve always been interested in public service,” Ley said. “And not that that’s everybody’s dream to be a police officer … but it’s something that I’ve wanted to do. I found that whenever I was interested in something, I did well at it, and it’s always interested me.”

Ley said he thinks it’s easier that they don’t work in the same division, but he makes sure to tell Norm that he loves him when he sees him.

“We’ll go sometimes a couple of weeks and not have any contact, but when we do we’ll talk and catch up, and talk about different cases occasionally,” Norm said.

Norm and Pasty’s other sons, Dodd and Chris, work in construction and sales respectively.

“The unfortunate side of things where families are impacted by broken homes, there’s not the support system that is really needed for these young kids to have good role models in their lives, and I’ve been blessed to have a phenomenal person in both mine and my brothers lives, to show us and to teach us the right thing to do,” Ley said.

Occasionally, they end up working at the same scene.

“I know there’s a lot of times where he’s responded or been on a scene where I’ve been called to,” Ley said. “People, a lot of times, I think can tell that we’re related even if they didn’t know who we were, but we say ‘hey’ to each other. It’s professional.”

Norm then chimed in and called it “business.”