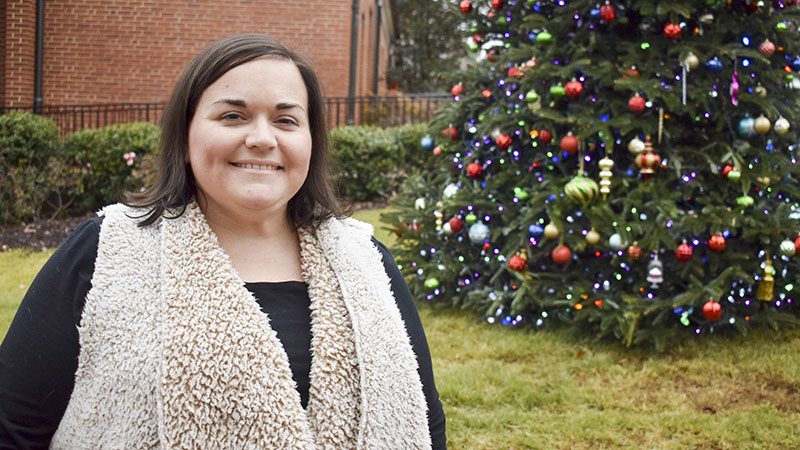 LaGrange College alumna Katie Hearn was diagnosed with psuedotumor cerebri, which is when there’s too much pressure on the skull, last year. (Gabrielle Jansen | Daily News)

It would be easy to give up when a medical condition meant that you could no longer see your own office’s door handle, but for LaGrange College alumna Katie Hearn, giving up was never an option.

After becoming almost totally blind last year due to a condition called pseudotumor cerebri, Hearn, an Atlanta Braves game day staff member, stayed hopeful and went to vocational retraining, so she could keep her job.

“Be positive, and have a positive attitude,” Hearn said, of her outlook on life.  “Give it your all, and it will all work out. Not every day is rosy. I try to make it be, but at the end of that day, I write my gratitude list, and I say, ‘OK I’m leaving this here today.’”

Hearn said she focused on what she could control, her attitude and effort. After she returned to work with the Braves this year, she was given the Walter Banks Award at the end of the baseball season for her extraordinary work. The Walter Banks Award is named after a stadium usher who has worked for the Braves for more than 50 years. The award is a given to a game day staff member who had done exemplary work.

Hearn, originally from Palmetto, graduated from LaGrange College in 2012 with a degree in political science and a minor in English. Hearn played for the school’s softball team, and interned at WELR 102.3 and with former U.S. Representative Lynn Westmoreland during her time in LaGrange.

After teaching for a few years, Hearn participated in a trainee-ship program with the Braves and was hired fulltime in the fall of 2016.

“You start on the front lines, so I was literally passing out bobbleheads and passing out stickers at the gates,” Hearn said of those early days. “Then I started monitoring the (team’s) social media. When I was monitoring, I did a bunch of different things, so if I saw someone was coming in for a big birthday, like a 90th birthday, I would arrange for the mascot to stop by and say hello or for someone to take some bobbleheads or a tomahawk to them.”

Hearn manages the team’s Facebook and Twitter accounts, and responds to emails sent to the Braves. Hearn said she always tries to make guest experiences positive and fix any problems experienced at the park.

In February of last year, Hearn’s vision started to narrow, and she was told by doctors that her optic nerves were swollen. By April, Hearn said she no longer felt comfortable enough to drive and couldn’t find her office’s door handle without looking directly at it. She was eventually diagnosed with pseudotumor cerebri, or idiopathic intercranial hypertension, a condition that results in pressure inside the skull increasing, leading to a loss of vision.

Hearn took a leave of absence right before opening day last year, and she had three optic nerve surgeries and two brain surgeries to correct her vision. Hearn said her vision is now limited. She can only see certain colors and shades if there is a high contrast.

“I had a realization in July of last year that my vision is not going to return like I thought it was,” Hearn said.

Hearn went to vocational rehabilitation school so she could re-learn how to work with the Braves and return to doing tasks such as pouring tea and putting toothpaste on a toothbrush without her vision. Hearn returned to work in January this year, and she said she’s in a good place now.

Hearn said every night, she writes a list of what she’s thankful for from that day, and there’s a contrast between last year and this year.

“This year I’ve been grateful for finishing projects at work and networking again and being confident presenting in a meeting,” Hearn said. “It gives you really good perspective to look back on what you’ve accomplished because it does make me feel like, ‘OK, I have so many things to be grateful for. The Braves could have dropped me like a hot potato, but they believed in me and wanted me to stay around, and they’ve ultimately been — other than my family and the Lord — they’ve been my rock through this and really encouraged me through it all.”

Hearn said the Braves have been with her even when she took a leave of absence, especially Walter Banks, who has worked for the team for more than 50 years.

“He’s a great mentor, but he’s also a great friend,” Hearn said. “He has taught me so much about southern hospitality, about how we treat people, but also just what it means to be there for someone. He called me every week last year. Once he knew I wasn’t going to be back, he was faithful and calling me, checking in on me. This year, he kept tabs on me, really checking how my work was going, keeping up and making sure I was doing what I was supposed to be doing.”

Hearn said she’s on the committee to pick the Walter Banks Award recipient, and she was surprised when she was named. Hearn said she kept asking others when they were going to meet, and kept championing another staff member for the award, but no one was getting back to her. Then one day they told her to come to work early to pick out the recipient.

“I didn’t think anything of it, but then Walter sat beside me, and he starts talking about the award and what it means and all this, and I was like, ‘What is about to happen?’” Hearn said. “He said, ‘This year, Katie Hearn has been selected to receive the Walter Banks Award.’ And I started bawling crying because I know how important it is.”

Hearn said she enjoyed winning the award even though she likes what she does by being in the background and helping others in the spotlight.

“I’m so proud to be in line with Walter. It was an amazing night, and my family got to come up, and it was really, really cool,” Hearn said.

Hearn said she’s stayed positive through all of her experience due to her faith.

Hearn said anytime self-doubt would start to settle, she would receive a call from a co-worker checking in and offering words of encouragement. Hearn said she also gained confidence after changing her prayer. Hearn’s advice for other diagnosed with pseudotumor cerebri and everyone is to not give up on themselves.

“Don’t ever give up on yourself,” Hearn said. “You’re worth it. Everybody has a purpose, and you’ve just got to continue doing what you’re doing.”

As for students at LaGrange College, Hearn said they should talk to their professors more often.

“You are so lucky to be on a campus where the staff, professors and everyone care about you, and they’re invested in you so use them as a resource,” Hearn said. “Talk to them and really engage with them because they’re here at a school like LaGrange because they want to invest in students. They want to be able to have a one-on-one relationship.”

Hearn’s sister, Ginny, is currently a senior majoring in business at LaGrange College.