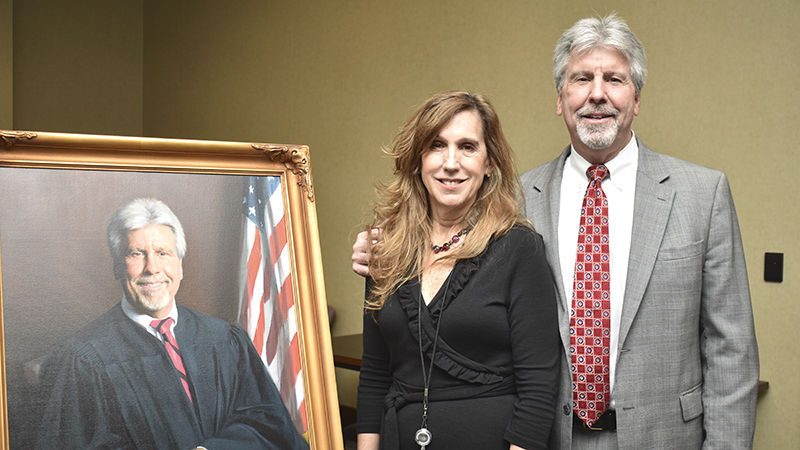 Jack and Monique Kirby pose for a photo at his retirement party on Wednesday. Jack Kirby has been practicing law for almost 40 years and will have served on the Troup County Superior Court for 13 years when he retires. (GAbrielle Jansen | Daily News)

“It’s been an honor and a privilege to serve as a judge,” Kirby said. “I’ve been going at it for about 40 years, and it’s probably time for me to move on.”

“When I was a young lawyer, I used to like to watch Jack Kirby and [I liked] watching him in the courtroom because he has this honesty about him that jurors love,” Skandalakis said. “If the jury likes you, they’re going to like your client. They’re going to like your position, and Jack had this ability to talk to a jury like they were his best friends. Jack taught me how to be a good trial lawyer.”

“He is an excellent resource, and he’s just a humble man,” Skandalakis said. “That says a lot about him.”

Kirby met his wife, Monique, the Chief Assistant District Attorney for the Coweta Judicial Circuit, when she served as Judge Joe Jackson’s law clerk. They have been married for 31 years and have two children, Max and Alex.

“He’s been a great father to me, and I think he’s going to really do well in retirement,” Max said. “He’s looking forward to spending time more with my mother and I and spending time on his farm. I know he’s also going to miss it, so it’s going to be bittersweet for him.”

Kirby officially retires on Jan. 31, 2019. He said he plans to take senior status, where he can fill in as a superior court judge when one of the judges are sick.

“I’ve got a little farm where I’m intending to bail some hay and work,” Kirby said. “I’m registered as a neutral in Georgia with the Georgia Commission on Dispute Resolution, so I hope to do some mediations in the private sector.”

When asked about his favorite memories as superior court judge, Kirby said the years run together for him.

“The memorable ones I wouldn’t put on the record,” Kirby said with a laugh.