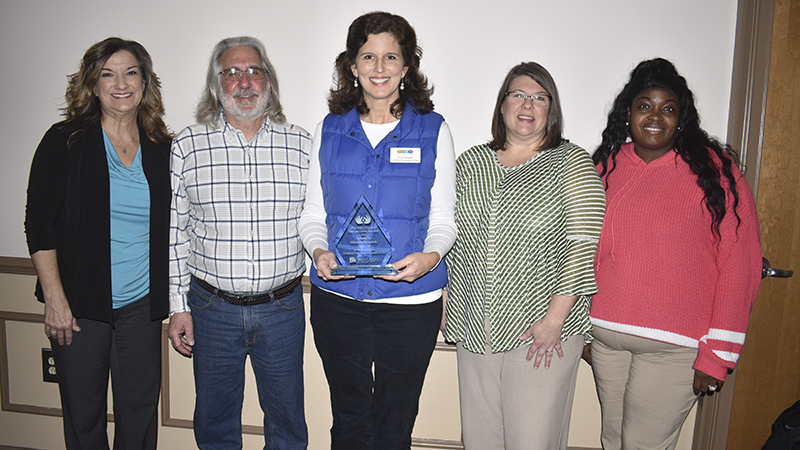 Taking care of family and children in need can be rewarding. Nicole Kennedy, the title 1 parent and family engagement coordinator and Safe Families for Children coach and co-leader for Rosemont Baptist Church, received the 2018 Mike Angstadt Family and Children Award Wednesday at Twin Cedars.

The award recognizes leaders in the Safe Families for Children program, which partners with churches for temporary care of at-risk children and families in crisis.

Former Twin Cedars director Mike Angstadt brought the Safe Families for Children program to Troup County in 2015, and brought it under the umbrella program. After Angstadt retired from Twin Cedars, an award was created in his name for those who have advanced the program.

“[Angstadt] has been a long-time director of Twin Cedars and not only has grown Twin Cedars to the great agency that it is now, he has also brought a lot of programs to our area, including Safe Families, but other programs within the community that are not under the umbrella of Twin Cedars,” said Cindi Gibson, the Safe Families coordinator. “Through his leadership and his guidance, he has really brought a lot of family-focused and children-focused programs that we need in our community.”

Kennedy was honored because she had helped lead the Safe Families program at Rosemont Baptist Church and coached others. Kennedy and her husband, Ken, have taken in 26 children throughout the three years the program has existed, and she has recruited about 60 people at Rosemont.

“Not only that, but she’s helped me personally,” Gibson said. “She has reached out to our ministry leads in other churches, help grow them, help give them ideas and inspire them as they grow safe families within their church.”

Safe Families leaders Sabrina Hayes and Michele Bedingfield were recognized as runner-ups for the award. Hayes runs two 24-hour centers, Kids R Us and Happy Days, for children before they get placed with parents.

Bedingfield, who is the director of Harmony House Domestic Violence Shelter, helped the program when it first started and took in one of the first families in the program.

“It’s been really amazing to see how our community has come together in unity to celebrate true heroes within our community,” Gibson said.

Angstadt said he’s humbled to have an award in his name.

“It’s humbling when an award that’s under my name the folks who receive it surpass with their servant leadership and things that I (did), so I couldn’t think of anything better,” Angstadt said.

In addition to working at TCSS, Kennedy also works on the Jungle Bus.

“I love it that [Sabrina and Michele are here] because we have all three partnered together with several different situations, and that’s the beauty of Safe Families — it’s bringing the community together,” Kennedy said. “It doesn’t matter what church or what agency [you work for], the commonality is doing what’s best for children and for their families, so I’m very honored.”