Sleeping in heavenly peace: Annual Sip and Shop funds given to charity that builds beds for local children 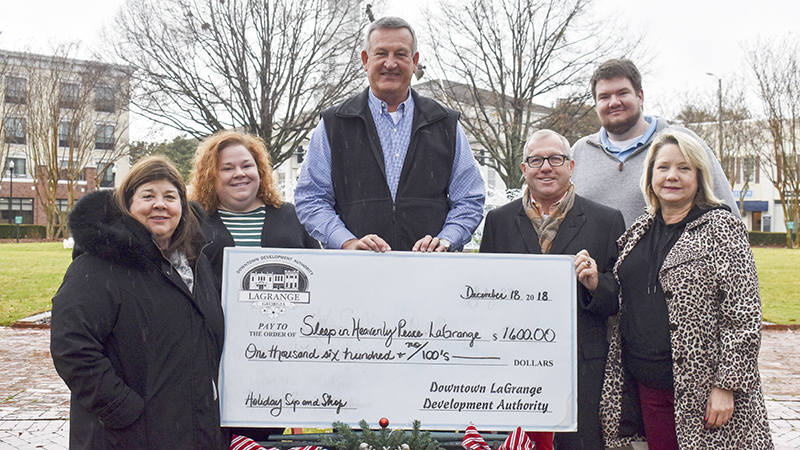 More beds for local children in need will be built thanks to the LaGrange downtown holiday Sip and Ship this year. The annual event gives part of its proceeds to a local charity, and on Friday, the Downtown LaGrange Development Authority presented Sleep in Heavenly Peace local chapter president Greg Watts with a $1,600 check.

Sleep in Heavenly Peace is a national nonprofit that builds beds for children in need. Watts and others started a local chapter in Troup County this summer.

Al Brannon, of Market on Main, said he and other downtown vendors were having a hard time choosing a nonprofit to benefit for the event. Brannon said he sat with Watts at a LaGrange-Troup Chamber of Commerce Early Bird Breakfast when he got the idea that they should give proceeds to Sleep in Heavenly Peace.

“I said ‘this is it’ because we were having a tough decision on who to go with this year,” Brannon said. “Barbie [Watts, director of promotion and marketing for the DLDA] came and sat at the table with us, and I introduced them, and they started talking.”

Brannon said this year’s proceeds was probably the most they have ever raised from the holiday Sip and Shop. Brannon said they usually raise between $1,200 and $1,500.

“It’s such a wonderful, wonderful organization,” Brannon said. “We want some worthwhile organization to reap the benefits from Sip and Shop.”

Watts said he didn’t know the local chapter was going to receive the benefits until the day of the sip and shop.

“We appreciate all of the support the community has given us this year, and we feel like people are starting to know who we are and what we do,” Watts said. “It’s been really exciting. We’re looking forward to a great 2019.”

To learn more about the LaGrange chapter of Sleep in Heavenly Peace, visit its Facebook page.