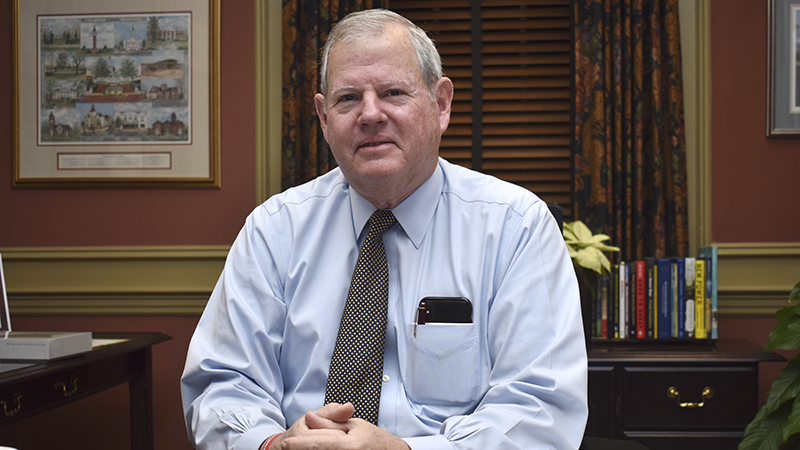 Callaway Foundation President Speer Burdette is retiring at the end of December. He has served as president for 16 years. -- Gabrielle Jansen | Daily News

“It’s just a good time for the transition for me personally as well as the foundation,” Burdette said. “We’re coming to the end of our major projects of downtown revitalization. We’ve still got one or two things to finish up. I’m 66-years-old now and there is mandatory retirement at age 70, but I chose to go ahead and retire now, so I can enjoy travel and other things.”

Burdette grew up in LaGrange and graduated from LaGrange High School in 1970. He will celebrate 45 years of marriage to high school sweetheart Debbie on Dec. 29. Debbie is also known in the community as Mama Jama and leader of the Troup County Certified Literacy Community Program.

He was managing partner for JK Boatwright and Co., but when he heard the previous president of the Callaway Foundation was retiring, he contacted them and said he was interested in the position. Burdette was offered the job a short time later.

“You’ve got to look at the whole downtown together,” Burdette said. “Fifteen years ago, downtown was dead at 5 o’clock. We had some offices downtown, and we still do, and when those people would leave for the day for work, you wouldn’t see a car on the street. I was having dinner downtown last night, Monday night, and the street was full of people. Del’avant was having something going on down there, the parking lot was full of people. People were walking the streets. That’s what you want to see.”

Burdette said one of the things they didn’t accomplish was more residential living in downtown.

“We’ve got some ideas of where that might be and how that might be done, but just weren’t able to get that done in the timeframe,” Burdette said.

Burdette said the foundations also fund a third of the budgets of all of Troup County’s art organizations.

“While we can’t fund every single project, almost every 501c3, which is a charitable organization, has benefitted from the Callaway Foundation,” Burdette said.

“These foundations have been a part of town for a long time and are not totally responsible but largely responsible for the things we have here that other towns of our size wouldn’t have.”

Burdette is being replaced by Paul “Tripp” Penn III. Burdette said he has spent the last month talking to Penn about the position.

“I think [the board] made a good choice,” Burdette said. “He’s a good person. You need somebody who’s got good judgment, and is a good person and got a good heart. I think Tripp has all of those — wise counsel — so he’ll be good.”

Burdette said the foundations are not about one person.

“The foundation is positioned to be here, and it has had and continues to have the best interest of Troup County, at heart,” Burdette said. “Now it doesn’t have to do that, but the trustees have chosen to do that predominantly because Mr. Callaway had said the money was mainly made in Troup County and he would like to see it spent here for the benefit of the citizens of Troup County, and that’s what we’ve done.”

As for plans for retirement, Burdette said he may travel to California to see his grandchildren, play golf and manage a few estates and trusts. Burdette said he has an office at his accounting firm and may do some consulting and tax work with Boatwright.

“I honestly can’t specifically tell you that I’m going to be doing exactly this or that because I don’t know yet, but I look forward to figuring it out,” Burdette said.

“We’re not leaving Troup County. We will still be here.”